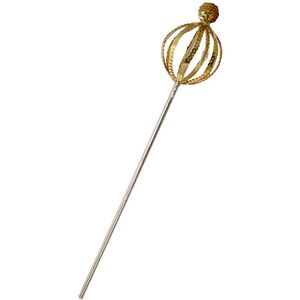 The Scepter of Superiority, also known as the Super Scepter or Superior Scepter, is an item from Goomsday Wii. It seems to be a sacred treasure dating back to before known history. It is the main goal of the game, and represents completion.

The Scepter of Superiority is mentioned in legends "as old as time itself", according to Goomboss. The concept of royalty was apparently created when the Scepter was used in the first written account of world domination. "All bowed before its might, and thousands fell dead where its shadow passed." Two hundred million years later, the Scepter has been obtained by the Koopa Troop. It is presumed that Bowser had plans for its use before Goomboss overthrew him.

It apparently holds the power to make its wielder the Superior Being. Goomboss plans to use it to turn each Goomba in his army into a million Goombas, giving him an undefeatable army. However, the Super Scepter requires the powers of a Mega Mustache in order to attain its full potential. So, until he can perfect his mustache, Goomboss simply uses it to create new subspecies of Goombas.-Another power of the Scepter is that any Boss (Big Bob-omb, King Boo, etc.) must serve its wielder. This allows Goomboss complete control over the Bosses, and thus over all Enemies. Presumably the Scepter can control emotions, since Waluigi plans to use it to make Daisy love him. Judging from the legend excerpt above, the Scepter has power over life and death.

Once Waluigi & co. reach Goomboss, the final battle begins. Waluigi uses his 'Stachios to gain a Mega Mustache. Grabbing the Scepter, he becomes Almighty Waluigi and prepares for combat.

Retrieved from "https://fantendo.fandom.com/wiki/Scepter_of_Superiority?oldid=692683"
Community content is available under CC-BY-SA unless otherwise noted.