Scatterbug is a small, black, insectoid Pokémon with a large head that takes up most of its body. The head is bisected by a line that runs from the forehead to the mouth, where it splits off. It has large khaki-colored eyes with square black pupils and no visible sclera. One tooth pokes out of its small mouth, and there are three white hairs on top of its head. Scatterbug has a three-segmented abdomen with two small, nubby legs on each segment. A white ruff of fur runs around its neck, and there is a large beige spot on its rear.

If threatened by a bird Pokémon, it can spew a powder that paralyzes on contact. The powder covering its body regulates its temperature, allowing it to adapt to any climate. 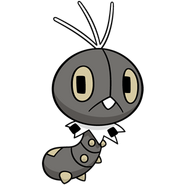 Dream World Artwork
Add a photo to this gallery
Retrieved from "https://fantendo.fandom.com/wiki/Scatterbug?oldid=3202885"
Community content is available under CC-BY-SA unless otherwise noted.