Fantendo - Game Ideas & More
Register
Don't have an account?
Sign In
Advertisement
in: Articles under Construction, Free to use Characters, Characters,
and 13 more

Scarlet is a member of the Wasteland Warriors. She, along with Iron Mask, PAIN-T, and Orithell debuted in Fantendo Smash Bros. Shattered. She is a demon with a former modeling career that literally went up in flames.

Scarlet has red, straight hair accented by her four horns, which are striped with red and black. She wears a red sweater and bike shorts. She also has unique feet; they are similar to that of a bird's.

Although retaining her hair style, it has the appearance of being somewhat messier. She wears an entirely new outfit, with a hoodie and black jean shorts replacing her sweater and bike shorts. She also has seemingly hidden her tail (which is revealed to be hidden in the back of her hoodie) and feet, with the feet inside a pair of roller skates. She now wears knee guards based off these new kicks.

She wears a new shirt with three black diamonds with a red flaming "S" behind them. She wears a black bracelet on her right hand.

Scarlet wears a new white snowcap over her horns and wears a red jacket with black and red stockings. Similar to most of her outfits, she does not wear pants despite the freezing cold. She also wears a pair of red snow boots.

Scarlet is fairly flirtatious and somewhat ADHD, unable to focus on one thing at a time. Her powers tend to do most of the work for her as she typically can hit three to five targets at once, however she isn't good in a close combat scenario because she lacks focus.

She is very concerned with her appearance due to her past as a model. She sometimes suffers from under-eating, which makes her sweat and become very weak. She tries to not let other people effect her as a person, but she often changes her personality to either fit in or be accepted. She attempts to please everyone, which is a huge fault for her. Although she is backed by her friends who love her for who she is, she occasionally feels unloved and lonely.

She loves french fries and usually is seen snacking on some during down time. When visiting fast food places, she doesn't order anything aside from three helpings of fries. They're her favorite food and nothing else comes even close. She tends to be very picky and is always reading the calories for every restaurant she goes to. She has never had a good metabolism, which is probably why she does not eat much- out of fear and out of habit.

On her off time, she likes to play video games while lying on the couch; she is usually at her laziest here, wearing a comfy sweater or t-shirt and not much else and usually with a bag of fries nearby. She also usually just puts on her glasses instead of putting on her contacts. She needs her glasses or contacts to see nearby objects but can see perfectly fine from a distance.

Scarlet was formerly known for her modeling career, however things went south when the company was destroyed in a fire that she caused. Living in the Wasteland for unknown reasons (which were later to be found out to be White Goddess' doing, as she didn't like how sexual she was.) she found it hard to find work. She later came across Iron Mask while looking for a job and decided to join him and PAIN-T.

Scarlet is capable of attacking with fire magic, which can come in the form of explosive fireworks or flame projectiles. She can project fire from any part of her body like her feet, hands, eyes, mouth, horns, or bellybutton. Her tail is stable enough to have stand just using it to connect with the ground. She also can change clothes within a second with one gesture.

Scarlet is also a excellent roller-skater, able to do incredibly sharp turns even on the roughest ground. She also has a pendent for fireworks, which she uses instead of fire magic these days because fire magic makes her tired.

Used to date him but broke up on good terms. The two obviously care a lot for each other, but Scarlet's tendencies of changing everything about herself at the drop of a hat clashes with his confidence in his identity. The two do occasionally show signs of affection for each other but it isn't serious.

The two occasionally bicker but respect and care for each other. They both have each other backs, although PAIN-T sees her as somewhat of a romantic rival for Iron Mask's affection when Scarlet isn't even aware that PAIN-T 2.0 is in love with Iron Mask. 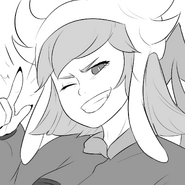