Start a Wiki
Saria is a character from the Legend of Zelda series who made her first appearance in the 1998 Nintendo 64 game The Legend of Zelda: Ocarina of Time. She is a female Kokiri who lives in the Kokiri Forest with the other Kokiri and in Ocarina of Time, Link who was at the time thought to be a Kokiri. She has a close friendship with Link and taught him Saria's Song on his Ocarina, later in the game when Link rescued her from the Forest Temple she is revealed to be the Forest Sage

Saria appears in the game Super Smash Bros. Clashed as an Assist Trophy character. Once summoned she stands in the background of the stage and gets out her Fairy Ocarina to play Saria's Song, all the song does is act as a distraction and she cannot harm anyone in any way.

Saria appears in Mario Kart Burning Rubber as a guest character. She is a lightweight. In Double Dash mode, her default partner is Young Link.

Saria in Ocarina of Time

Saria in Ocarina of Time 3D 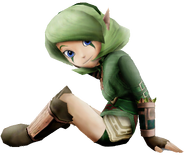 Add a photo to this gallery
Retrieved from "https://fantendo.fandom.com/wiki/Saria?oldid=2938707"
Community content is available under CC-BY-SA unless otherwise noted.