Sara is one of the main characters in the Bombell series. She's some kind of ghost, but not a Boo at all. She is a little awkward, friendly and innocent, but she can get annoyed easily and she's kind of scary when getting mad. She becomes Bombell's friend when they find her escaping from Bombx and help her. She then joins him.

Sara isn't a Boo but some kind of other ghost. She is white-colored and has blue eyes and blue blush. She has a curvy tail and a curvy form on her head that looks like hair. She also wears a red ribbon.

Sara makes her first appearance as a playable character in this game. She's found by Bombell and friends trying to escape from a bunch of Bombx. She as thanks joins them in their adventure and becomes their friend. 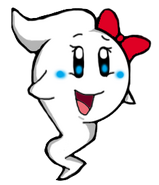 Bomb Frenzy
Add a photo to this gallery
Retrieved from "https://fantendo.fandom.com/wiki/Sara_(Bombell_series)?oldid=2029519"
Community content is available under CC-BY-SA unless otherwise noted.