Sandslash P is a teenager and one of the titular characters in the Litle P and Sandslash Series. He often tries to scare his younger brother Litle P and his friends by telling them scary stories. He will make a guest appearence in Nintendo Party as a playable character.

Usually, Sandslash is quiet and laid-back, but he's shown that this is just to pass off as cool. In actuality, he's a brotherly figure to the local kids and seems to be a fun-loving person, like his little brother.

Sandslash is shown to have many abilities typical of Ground-type Pokémon, such as strength and endurance. He's a bit sluggish and heavy, which makes him somewhat of an opposite to Litle P.

Relations to Other Characters

Sandslash normally makes fun of his brother and teases him, but he's actually very protective of Litle P. He is, however, oblivious of his brothers's goals to be just like him, and is always annoyed when Litle P tries to impress him.

Sandslash and Jiggy generally get along because of their similar mature personalities, unlike Litle P's immature nature.

Sandslash is on good terms with Randy, but his relationship with Lotey seems speculation at best. 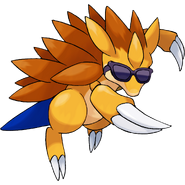 Add a photo to this gallery
Retrieved from "https://fantendo.fandom.com/wiki/Sandslash_P?oldid=2355138"
Community content is available under CC-BY-SA unless otherwise noted.