Sandslash are a race of Ground-type Pokémon whom resemble mice. Their ability to dig is somewhat based on moles. They evolve from Sandshrew starting at level 22.

Sandslash are Pokémon creatures whom resemble mice, moles and hedgehogs. They have yellow bodies and white underbellies and a large amount of brown pikes on their backs. They have pitch-black eyes and two pointy ears, who follow the pattern of the pikes on the back. They also have a yellow spike on top of their head. 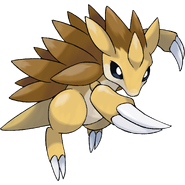 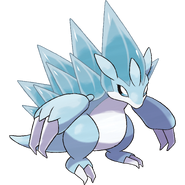