This article refers to the character of Samus Aran within her Power Suit. For other instances of Samus, see here.

“Planet Zebes... I called this place home once, in peaceful times, long before evil haunted the caverns below. Now I shall finally tell the tale of my first battle here... My so-called Zero Mission”
— Samus Aran, Metroid: Zero Mission

Samus Aran is a female intergalactic bounty hunter, who protects her home planet, Zebes. When wearing her suit she can be mistaken for a robot, she is really a human with Chozo and Metroid blood, who uses this Power Suit in order to destroy the Metroids and Space Pirates. Her two arch-nemeses are Ridley and Mother Brain. Samus continues to protect her planet (and sometimes other planets) from danger.

During the events of Metroid Prime 4: Mutation, the Space Pirates take a DNA sample of Samus and mix it with Phazon. They use this Hunter Phazon on a Metroid causing it to mutate into a Samus-like form called Metroid Samus. Later, Samus falls into a vat of Hunter Phazon. Samus, already being herself, grew into a large mutated beast. This mutation gave her incredible strength, sharp senses, and agility.

In Metroid Fusion 2: Fission, Samus gets infected by a thick, brown X Parasite which caused her to split into four separate forms, blue, green, orange, and purple.

In Erased Memories, Samus's memory is wiped out, and she falls in love with Luigi in New Pork City. Porky attacks, and they both stop Porky, and then they go to the Mushroom Kingdom.

Samus Aran appears as Princess Lara's newest bodyguard in Captain N: The Game Master and very rarely speaks. She is the most mysterious of the N Team, so mysterious that nobody even knows that she's a girl. She is a loyal member of the team seemingly however she joins only so she can extract her personal revenge on Mother Brain. She claims that she does not care for the team to Kevin once she reveals her true intent however by the end of the game she reveals that she truely does care as she reveals herself to be a woman to the others.

Samus appears in Metroid Prime 4: Clone as the playable character. She uses the Clone Suit to destroy parts of a Space Pirate space station, but however loses her new suit to Sylux. After that, she locates a new Mother Brain, and destroys the space station. However, she does not make it out in time and is blown off to a jungle planet...

Samus appears as an unlockable character in Second Era: The Silver Sun. She wants to save the multiverse by defeating the Silver Sun.

Samus works alongside the player character in Metroid Ultra.

Samus reappears in Super Smash Bros. Calamity as a starter character. Samus retains her Super Smash Bros. Brawl moveset, but now she has a different moveset that can be swapped out using her side taunt. Samus also has a new down special, Melee Counter from Metroid: Samus Returns.

Samus is a returning veteran in SSBUF. He confirmed to appear on May 25, 2018 along side the rest of the original 8. She returns with her zero suit form.

Samus is one of the default characters in the game, her Zero Suit is an alternate outfit for her. 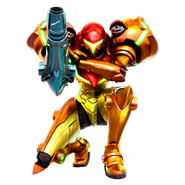 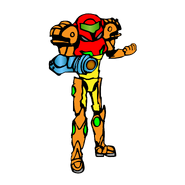 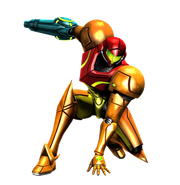 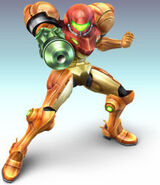 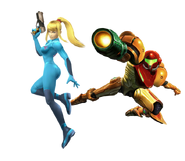 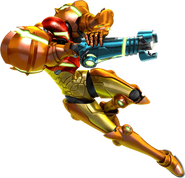 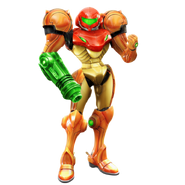 Samus as she appears in Super Smash Bros. Calamity. 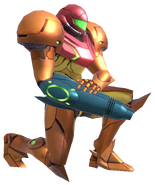 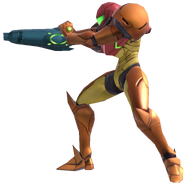 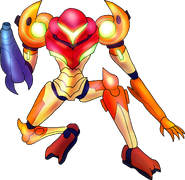