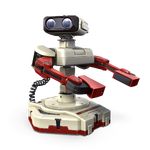 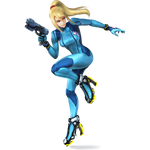 Samus & R.O.B are the fourth character in Battle Theater, and default characters. They play the role of a duo, being opposities of each other. They were revealed on February 3.

The two are a duo who attack and are controlled together. R.O.B is a slow bruiser and Samus is a quick character who isn't that strong.

"The two make a surprisingly cute couple. One is a robot and the other wears high-tech armor, so it just makes sense. Don't tell the other Smashers though. They make a good pair in battle, each using their unique skills. R.O.B is perfect for laying down damage, and Samus is quite athletic.

Retrieved from "https://fantendo.fandom.com/wiki/Samus_%26_R.O.B_(Battle_Theater)?oldid=2877566"
Community content is available under CC-BY-SA unless otherwise noted.