Start a Wiki
“Singing is my nature and hobby, because I hate a world where there no music or dancing or singing. It brings harmony, melody, rhythm and peace to the world, That why I became a popstar in the first place.” — Sally Yoshi, Sally's Music World:“{{{1}}}”

Sally Yoshi (or just Sally or Sal) is a sweet and innocent young Yoshi-Koopa hybrid girl, who is a very famous, popular pop star. She is very fearless and an adventurer who travels with Mario, Luigi, and Alberto on adventures to defeat Bowser and save Princess Peach. She has two best friends name Melody and Yosheena and a boyfriend name Yosteel.

Sally was born in Koopa Village to her parents, Lily Koopa and an unknown yellow Yoshi. When her father past away when she was very young, Sally and her mother, Lily moved to Toad Town to start a new life where her singing career begins. As she moved into her new house, she meets her soon-to-be boyfriend, Yosteel, who was her best friend at the time. The two them quickly become very close friends and both begin to have feelings for each other, which both of them are unaware that other has a crush on them.

Sally's career begin when she sang to Princess Peach when they first meet at the docks (Sally was unaware Peach was a princess because she didn't have her crown on) and just as she was done singing to her, Bowser came and took Peach away and Sally was shocked by this ran to get help, only to bump into the Mario Bros. She wanted to save the princess too, so Mario allows her to come along to help out. Sally was very useful on the adventure as Bowser's spell can be broken by her beautiful singing voice and she can fly the bros to high places by using her ponytail. After saving the day once again and saving the princess, Peach asked Sally to be an idol to the Mushroom Kingdom and sing to them to lift there spirit up. With that in mind, Sally accepts it and became well known around the Mushroom Kingdom and the world.

Upon her return, Yossteel gave Melody, her little star sprite best friend who goes with her where ever she goes.

Sally is kind and sweet to anyone she meets. Her lively and cheerful personality makes her easy to be friends with and popular with the boys, her personality even surprises the minions of Bowser, Captian Syrup and King K. Rool, who love to hear her sing. Sally takes great pride in singing and music, as she believes the world is nothing without the two together and once said they bring peace to the world if they are used right.

Sally is a Hybrid, half-Yoshi, and half-Koopa, but she mostly looks like a Yoshi with her saddle looking like a red Koopa shell and her skin is yellow.

Earlier appearance- She wears her blond hair in a ponytail and has a white flower hairclip on her bangs, almost looking like fringes and her eyes are hazel color. Her outfit is a blue tank top with a pink heart on it and red shorts. her shoes are red also and to top off, she wears a butterfly necklace. Her second outfit is a red shirt with a jewel in the front, blue shorts and a pearl necklace, her hair has a blue flower hairclip and wear a bracelet.

Newer appearance- Sally Yoshi now has long blonde hair tied in a ponytail with small blonde bangs that poke out of her red beret. She wears a short red skirt with a deep red vest to match and blue jeans. She also wears bright red shoes

Beta appearance- the look is that she was just a Yoshi, who is white with pink hair and eyes. She wore a summer peach color sleeveless shirt and blue shorts with white shoes.

Sally made a lot of friends during her travels and in sports games. Mario, Luigi, Alberto, Maria, Luise, Dixie Kong, Melody, Yosheena, and Yosteel are her best friends and who she has good chemistry with. Her closet friends is a Hammer Sis, Peach, Yoshi and Diddy Kong. She good friends with all the other characters she meets or hangs out with.

But also she made enemies. Bowser tried everything in his powers to get rid of Sally because her singing always seems to get in the way of his plans and he will stop at nothing to ruin Sally's voice. Also on her bad side, is Wendy O. Koopa, who is jealous of the little popstar getting all of the attention and will stop at nothing to beat her and there is Kass, who is a rival with Sally because she is best friends with Dixie Kong. 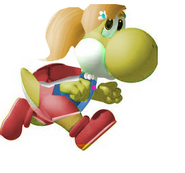 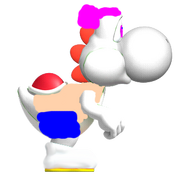 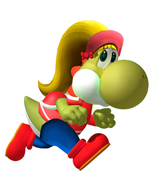 Art done by DeviantArt User, SammyChan
Add a photo to this gallery

Retrieved from "https://fantendo.fandom.com/wiki/Sally_Yoshi?oldid=3284116"
Community content is available under CC-BY-SA unless otherwise noted.