Sakura Kasugano is a recurring playable character in the Street Fighter and Rival Schools series. First appearing in Street Fighter Alpha 2, Sakura is a Japanese girl who has an intense fixation on Ryu, who inspired her to take up fighting after she watched him participate in the first World Warrior tournament. Up until Street Fighter V, Sakura attended Tamagawa Minami High alongside her best friend Kei Chitose. After graduating, she has since gotten a job working part-time as the manager of an arcade while studying at college. Sakura was a participant in the third World Warrior tournament and the fourth female fighter introduced into the series. Sakura was also the star of two comic series: Sakura Ganbaru!, which also introduced her rival Karin Kanzuki, and Street Fighter Legends: Sakura.

As Sakura considers Ryu her hero, and he (and, to a lesser extent, Ken Masters) is the main reason she has taken up training, Sakura has worked to imitate his Ansatsuken fighting style. Unlike Ryu and the others who use the actual Ansatsuken style in combat (namely Akuma and Gouken), Sakura's fighting style uses several unorthodox versions of recurring attacks, such as performing the Shoryuken after running forwards (Shouoken) and performing her own version of the Tatsumaki Senpukyaku to descend to the ground slowly after jumping into the air (Shunpukyaku).

Since Street Fighter IV, Sakura has been voiced by Misao Fukuen in Japanese and in English by Brittney Lee Harvey. In Marvel Super Heroes vs. Street Fighter, Sakura has an alternate form referred to as Dark Sakura (alternatively Suntanned Sakura or Sunburned Sakura), who possesses some of the same abilities as those who use the dark energy known as Satsui no Hado.

Often described as a tomboy, Sakura has short brown hair that is often back by a headband. She also has fair skin and brown eyes.

In her debut appearance and most following it, Sakura primarily wore her high school's sailor fuku uniform into combat. Her clothing consists of a white top bearing her midriff, with a blue skirt. Her short-sleeved blouse ended with blue cuffs cut through by a white line, making it identical in appearance to the collar of her outfit. She wears a yellow ribbon around her neck, indicating she is a senior at her school. Under her blouse she wore a red undershirt that extended up around her neck, a similar colour to her combat gloves and sneakers. The white headband she wore was given to her by Ryu.

In Street Fighter V, Sakura receives a major redesign due to her graduating from Tamagawa Minami High, with Sakura now wearing the uniform of her college. Her hair has grown considerably, though is still relatively short, and now covers up most of a new red headband. Sakura wears a long-sleeved white button-up shirt, seemingly over the same red undershirt as in previous appearances, and has a pink and gold bolero tie hanging around her neck. Over top her shirt she wears a dark blue vest that has pink accents around its edges; this vest is the same colour as her skirt and her socks, the latter of which also possesses a pink trim. She now wears short black boots instead of sneakers. Sakura's combat gloves have been updated to match those worn by Ryu, being similarly red in colour and possessing stylized writing on their wrists. Due to her job as an arcade manager, she also wears an earpiece with a microphone extending out around the front of her mouth.

Sakura appears in Jake's Super Smash Bros. as a playable character. She is classified as an Dash Fighter, having a moveset that, while not identical, is very similar to that used by Ryu; in a sense, she serves as a replacement to Ken, who appears in a similar role in Super Smash Bros. Ultimate. Like Ryu, most of Sakura's special moves can be performed by using the same directional inputs as used in the Street Fighter series; outside of her Final Smash, only her down special move can not be performed this way. Another trait Sakura shares with Ryu is that she possesses two Final Smash attacks, with the distance from her target determining which attack she performs. From a long distance Sakura performs Shinku Hadoken (which Ryu also uses), a stronger version of the Hadoken attack that has Sakura throwing forwards a large ball of energy that pulls nearby enemies towards it. From point-blank range she instead uses Haru Ranman, one of her Ultra Combos from Street Fighter IV that sees her perform a series of somewhat-slapstick attacks.

Sakura appears as part of the base roster of Super Smash Bros. Galactic Battle as the third representative of the Street Fighter series. Sakura's moveset is similar to the varitions of Ryu and Ken from the Street Fighter series, making her a semi-clone rather than an Echo Fighter as Ken was to Ryu in Ultimate. Unlike Ryu and Ken, Sakura's moves take from the variations from both the Gem Fighter and Puzzle Fighter games such as using tennis rackets, watermelons, and motor bikes for her attacks while retaining many of the moves that she used in the Street Fighter Alpha, IV, and V games that she appeared in. Like the rest of the base roster cast, Sakura appears in and is playable in The Elemental Labrynith.

Like all other fighters from Galactic Battle, Base Roster, and DLC, Sakura will return as a playable fighter in Super Smash Bros. Life or Death. Her role in the Kiss of Death is currently unknown alongside most of the cast.

Sakura is a playable character on Super Smash Stadium, where she's an Echo Fighter of Ryu, occupying two of his costumes. She has been present since Season 39, when the number of costumes expanded to eight.

Sakura appears as a Primary Spirit. 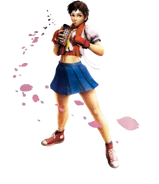 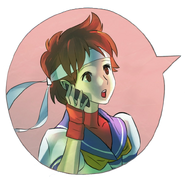 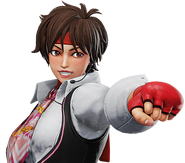 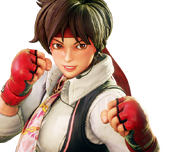 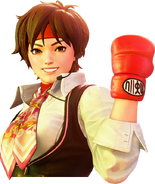