Fantendo - Game Ideas & More
Register
Don't have an account?
Sign In
Advertisement
in: Free to use Characters, The Threat Arc, What is the New Fantendoverse?,
and 20 more

Sakeena Kamel is a character that was first mentioned in the epilogue of Fantendo - Genesis as the fanfiction writer KamikazeBlaxe008. She is a Muslim teenager that is a huge fangirl of the Fantendo characters, often writing fanfics about them. She debuted in Fantendo Now in the episode Metamorphosis, where she was given her famed metal-bending abilities. Since then, she has become a valued member of Unten's team. The character was created by Helena Harper (t∣b∣c) as a way to reboot the role of Ella Metals as well as to add more diversity to the regular cast of characters that would be the face of important Fantendoverse materials.

Sakeena Kamel was a metal-bending teenager that was a big fan of the Fantendo characters, starting with Unten's crash and face off with Quartz back in Fantendo - Genesis. She was later given metal-bending powers by The Fan and The Enemy and later met her heroes, who took residence at her house for a short bit. Since then, she has become a valued team member and has grown genuine friendships with her idols. Much of her grand-standing character arc in the Fantendoverse is growing up and maturing, with her writing getting better and her attitude towards her friends changing as she grows out of idolizing them and seeing them as flawed figures that she still loves.

Post-Victory, Sakeena Kamel has grown into adulthood and is beginning to embrace her identity more, having mostly left the family faith (although still attends mosque prayers with her family on Fridays) and exploring her sexuality with various men and women as seen in Syande - Waste Your Hate.

Sakeena is a late teen of the Muslim descent. She has brown hair and brown eyes and wears a pair of square-frame glasses. One important thing to note is that she never wears short sleeves or anything that doesn't cover up most of her body. If she wears a t-shirt, she also has a long shirt under it. She wears a red scarf collar around her neck, somewhat of a consistent design trait. As she grown more distant from her faith, she has begun to relax more on this design rule, but still doesn't show much skin in her outfits.

Post-Victory, Sakeena Kamel has created a new look for herself, adopting a mostly black outfit with a magnet symbol on the front of her sleeveless jacket and having a red and blue motif across her outfit. Her red scarf has been replaced with a new black leather scarf with a magnet symbol across the two ends. Her hair has also gotten a bit wilder.

Sakeena is a "fan girl" and a fairly huge one at that. While she is portrayed as a terrible writer in the beginning of Fantendo Now, it steadily improves over the show to the point where Unten asks her to write a Rachten fanfiction. She jumps at any opportunity to go on an adventure with her heroes (as seen in Bermuda, Bermuda) and seems to "ship" any combination (including gay pairings).

Slowly over the course of her appearances she seems to have more and more of a disdain for her religion. In Hotdogs and Halal, she mentions feeling incredibly unwelcome in America due to her heritage and religion. Although she follows the rules closely for the most part, she has violated some of the Koran's teachings.

The contents of her fanfics have varied over time to time. She used to write herself in as a character lot, but dropped this, seeing it as lazy writing (as seen in The Threat's Beorn).

She appears at the end of Fantendo Genesis, mentioned as one of the people saved during the attack. In the epilogue the Fantendo characters find that they have fans who write fanfiction about them, Sakeena Kamel being one of them.

She makes her official debut in the third episode "Metamorphosis", explaining how she gets her powers and following her life in more depth. She appears in various episodes after that point. She subtly grows over the course of the show, from being a terrible writer to a fairly decent one.

Appears as one of the 20 initial characters that were revealed. Her doppelganger is Emma Alloys. She has her own host of conversations about every single doppelganger and explains it to their "originals".

Sakeena appears as a major character in the story mode, reportedly one of the three "main" focuses of the story mode. She also seems to have changed her name to "Sakeena Metals" and refuses to tell Strafe why for the beginning of the story.

Sakeena has the power to control metal, able to bend it to her whims and turn it into an metallic liquid substance that she can aim and form into various objects. Her style of metal-bending is to form it into metal blobs that float around her, allowing her to shoot them at her foes. She can also straight up bend metal, with varying metals having different strength levels that can make it harder or easier to bend for her.

Hyper Form Sakeena Kamel is the Hyper Mode of Sakeena Kamel, accessible through her Hyper Mode orb. This Hyper Form has not appeared in the New Fantendoverse so far, but is confirmed to appear in the future. In this form, her powers become heightened, able to cool and heat up metal to add a element of hot and cold to her metal attacks, as well as being able to bend all metal at the same fast rate. She can also now control the calcium present in many lifeforms bodies, notably present in human bodies, able to control them like puppets. She gains two new antenna on her head that allows her to bend metal at a much greater distance, greatly surpassing the 25 feet distance. She is also able to lob projectiles much faster and farther.

Hyper Form Sakeena Kamel is notably more aggressive than her more down-to-earth normal personality, not willing to see any of her friends or people she admires hurt. While she has not killed anyone in this form, she has been close to doing so before being talked out of it. While she's not immune to being reasoned with, she will only listen to people she respects. She also tends to narrate all her actions in this form, attempting to pull off new attacks to varying degrees of success. She is also observant of power levels, usually attempting to catalog feats of strengths she observes from others in Hyper Mode Form to create a "Tier List". She is one of more stronger characters with a Hyper Form. 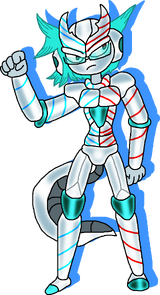 Second Form Sakeena Kamel is the Second Form of Sakeena Kamel, appearing in Fantendoverse X: Space and Fantendoverse X: Time. This form is not canon in the New Fantendoverse, as while Sakeena did inadvertently serve as one of the Threat's Top 10 Members, she was never given a Second Form like Quartz did. Sakeena can access this form at any time, although it comes with much bigger drawbacks than a Hyper Mode would give her. In this form, Sakeena Kamel gains a ton more power and defense, as well as gaining the ability to create clones and increased magnetism attacks. She however, becomes emotionless and almost robotic, as well as losing all of her humanity, being unable to be reasoned with.

Second Form Sakeena Kamel is notable in that she is the first human to be gifted with this kind of form, and in the dimension she hails from, she has not exited out of this form in a quite a long time, being a valued member of the Top 10, becoming The Threat's New One and having killed just about all the people she considered friends. It is perhaps possible that she has never exited from this form knowing that when she realizes what she has done, she will not be able to forgive herself for it.

Likely her closest relationship, although whether they're more than friends is still up in the air. The two went on a "date" in Hotdogs and Halal, however Strafe didn't see as romantic. Strafe does guard Sakeena very closely, however has messed up a couple times with communication. Rachel seems to interpret their relationship as romantic in By Candlelight. Regardless if they are, it's clear they have a close bond.

Leah doesn't actually like Sakeena all that much, as it reminds her too much of Ella Metals. She has shared these feelings with Strafe while drunk but it hasn't come up much in their interactions. She calls Sakeena "Metals", which seems to have impacted her name change in Fantendo Smash Bros. Victory.

As she appears in Fantendo Sports Resort.

As she appears in Fantendo Smash Bros. Victory.

Sakeena in some Holiday wear.

Sakeena Kamel in Stand Out Stories