Sableye, known in Japan as ヤミラミ (Yamirami), is a Dark/Ghost-type Pokémon, and isn't known to evolve. Despite this, it is able to Mega Evolve into Mega Sableye. It is seen as a parallel to Mawile.

Sableye is a dark purple, humanoid Pokémon that lives in caves and has a red, ruby-like gemstone on its gut, and has three more gemstones on its back, in the colors red, blue and green. Its head is half hexagonal, half oval in shape, and has long, spiky, ear-like appendages on each side. It also has light blue gemstones for eyes, which appears to be the result of eating lots of gemstones, a common diet for this Pokémon. These eyes allow it to see in low light and glitter in the darkness. Sableye rarely appears around humans.

When it Mega Evolves, its gemstone eyes turn red, its spiky appendages on its head grow larger and gain another spike, and it gains a crest-like appendage. Its red gem on its gut has separated from itself and turned into a huge, hexagonal jewel, that now contains the source of Sableye's powers. This jewel is as rock hard as a diamond, so Sableye uses it as some sort of shield that it can shelter behind. Because of the gem's increased size, Sableye's weight becomes much larger, and its defensive stats gain a prominent boost, while its Speed heavily decreases.

Sableye's appearance is based on the supposed extraterrestrial creatures known as the Hopkinsville Goblins, both having shiny eyes, small posture, clawed arms, swaying hips and short legs.

Sableye is a combination of sable and eye. 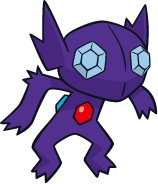 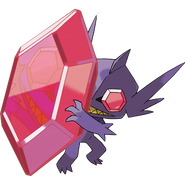 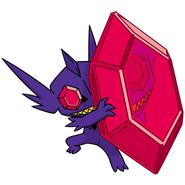 Generation VI
Add a photo to this gallery
Retrieved from "https://fantendo.fandom.com/wiki/Sableye?oldid=3200148"
Community content is available under CC-BY-SA unless otherwise noted.