Ryu has more animations due to the inclusion of more taunts and victory poses.

Dash attack can be changed just like his tilts, which makes him perform the Tatsumaki Senpukyaku.

Side special is now Focus Attack, which acts in the same way as it did before.

New down special, Alpha Counter from the Street Fighter Alpha series, which acts like a counter.

Ryu's Hadoken and Shoryuken (his neutral and up specials, respectively) can be upgraded if the move is performed by using a specific directional input and the standard attack button/special button, making them stronger in some way.

T for tapped, HL for held 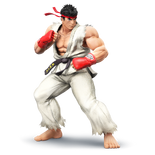 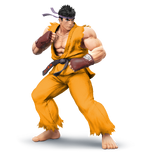 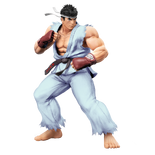 Add a photo to this gallery
Credit goes to Yendorami (t∣b∣c) for some of the alternates.

Retrieved from "https://fantendo.fandom.com/wiki/Ryu_(Calamity)?oldid=2565554"
Community content is available under CC-BY-SA unless otherwise noted.