Rush is Mega Man's faithful robotic dog companion, created by Dr. Light to assist Mega Man in his travels, having several functions that the blue bomber can use. Rush first appeared in Mega Man 3, and ever since he appeared in other games relating to the classic Mega Man series, as well as appearing in crossover games involving the series, like Super Smash Bros. for Nintendo 3DS / Wii U. 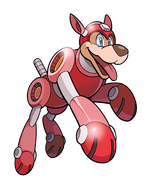 Rush from the Archie Comics.
Add a photo to this gallery

Retrieved from "https://fantendo.fandom.com/wiki/Rush?oldid=3185758"
Community content is available under CC-BY-SA unless otherwise noted.