“Thanks for saving me a few years ago, I guess...”
— Ruined Dragon, Super Mario Odyssey: Return

The Ruined Dragon (Japanese: ホロビアドラゴン Horobia Doragon), also known as the Lord of Lightning, is a boss that appears within Super Mario Odyssey. The Ruined Dragon first appears under Bowser's command when Mario and Cappy attempt to travel to Bowser's Kingdom, halting their progress by damaging their ship and stranding the two in the Ruined Dragon's homeland, the Ruined Kingdom.

While it is unknown as to whether or not the Ruined Dragon willingly serves Bowser, the crown he wears when he first appears, the design of which is based on the Koopa King's head, and the sword-like pins that hold it down imply that he may have been enslaved by the Koopa Troop.

The Ruined Dragon possesses dark purple (almost black) scales that cover most of its body, with the skin exposed on his stomach appearing to be a lighter purple colour. He possesses wings, large enough to carry him through the air with ease, with the plagiopatagium that spreads between each finger being a crimson colour. The Ruined Dragon possesses four horns on the top of his head, one of which reveals a Power Moon should Mario throw Cappy onto it. The Ruined Dragon is also perhaps the largest creature within the Mario franchise; he is so large that the bottom half of his body has yet to appear on-screen.

Unlike most creatures within the Super Mario series, including other species based off dragons, the Ruined Dragon's design is far more realistic and detailed, making it stand out among the cartoony visuals of the general Mario cast and world. As such he possesses few exaggerated features.

The Ruined Dragon is one of the few bosses in Super Mario Odyssey to be given some background lore through the Crazy Cap brochure. According to the Ruined Kingdom's brochure, the Lord of Lightning is the one responsible for reducing Crumbleden to the ruined state that Mario finds it in. The same brochure also mentions an altar in the shape of his head being built to talk or confront him, and to restrain the lightning he controls.

In Super Mario Odyssey, he appear prior to entering Bowser's Kingdom, during a cutscene depicting Bowser on his head, ordering him to destroy the Odyssey. The Odyssey goes down without a fight, causing the Odyssey to crash into the Ruined Kingdom. Mario then needs to head over to the arena where the Ruined Dragon is battled.

During his boss fight, the Ruined Dragon fires off electrical spiked wheels that drift around the arena, heading towards the edges. He then slams his head down, a electrical current being blasted across the arena that Mario needs to jump over. After this, he will enter a rest mode, where he sets his head down, allowing Mario to remove his pins that connect his crown to his head. Once this crown has been removed, Mario can ground stomp it for damage. During this phase, Burrbos will pop up to attack Mario.

After being defeated, the Ruined Dragon awards Mario with a Multi-Moon that he can repair The Odyssey with. On return trips to the Ruined Kingdom, he will state that he is tired, although the player can jump across his body with no repercussions. Additionally, a painting can be found in the Mushroom Kingdom that allows the player to fight him again, but on a slippery arena ground and harder alterations to his usual attacks.

In Super Mario Odyssey: Return, some Draconoids came to live in Crumbleden to be closer to the Ruined Dragon. He's now an NPC as his role of the boss of the Ruined Kingdom has been replaced by a posessed Draconoid.

The Ruined Dragon appears in this film, where he is depicted as the master of lost realities. He is first encountered by Old Mario in the Ruined Kingdom alongside Mephiles, who threatens to have him wipe him out if he doesn't join him.

The Ruined Dragon appears as a Master Spirit, which can be obtained by defeating a giant Charizard clone in Shadows of Smash mode or defeating Bahamut with Yoshi in the Classic Mode. 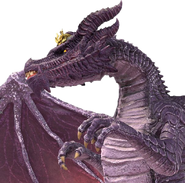