Start a Wiki
Ruby Rose is the main protagonist of Rooster Teeth's RWBY franchise. The young half-sister of Yang Xiao Long and the daughter of Taiyang Xiao Long and Summer Rose, Ruby is a huntress in training who studied at Vale's prestigious Beacon Academy until the Battle of Beacon shut it down. During her tenure, she served as the leader of Team RWBY, which also consisted of Weiss Schnee, Blake Belladonna, and her half-sister Yang.

Ever since she was little, Ruby has had a romanticized view of the Huntsman profession. She is quick to reveal she wanted to become a Huntress in order to be like the great heroes in fairy tales, and she has described being one as far more "romantic" than being a police officer. Her mentality is described as "I don't have time for my emotions. I've gotta make sure that everybody else is okay." She has also shown a distinct lack of ability picking up social cues due to being a very open and honest person. This results in her inability to pick up Weiss' sarcasm in the "The Shining Beacon" and her struggle to act formally in "It's Brawl in the Family".

Although Ruby has no trouble interacting with her friends, she does have trouble actually making them, and once admits that seeing new weapons "is like meeting new people, but better". This could have been a result of her having been accepted two years earlier to Beacon Academy, which forces her to leave her friends at Signal behind, as well as interact with people that are both older and more experienced than she is. Regardless, both she and Jaune Arc toast to being socially awkward during the Beacon Dance.

In the second chapter of the manga, it is revealed that Ruby has had a fear of large crowds, as shown when she freezes up during a sparring match against Cardin Winchester. However, she manages to work through that fear with some encouragement from her teammates long enough to win the spar, and by the Vytal Festival, she has overcome them entirely.

Ruby also has a sweet tooth, preferring five sugars in her coffee and scarfing down a large plate of cookies in "Ruby Rose". She is even seen with a plate of cookies in "Jaunedice", while her friends are eating more nutritious meals. This is shown again in "Alone Together", where Ruby rejoices and accepts coffee after learning Weiss put "blasphemous amounts of cream and sugar" in it.

In combat or dangerous situations, she is shown to be quite impulsive and battle eager, such as when she attacks a Death Stalker on sight before learning of its high resistance to bullets and blades. This trait contrasts with her adaptability, for she is quite capable of forming attack plans with others in order to take down stronger foes, such as the Nevermore in "Players and Pieces" and Roman in the Atlesian Paladin-290 in "Painting the Town...". After her discussion with Ozpin in "The Badge and The Burden, Pt.2", Ruby begins to take her role as leader of Team RWBY seriously. However, future instances of recklessness are when none of her teammates are near her, such as in the "Battle of Beacon" when she goes alone to engage Roman and Neopolitan, who both outnumbered and outmatched her.

Since Volume 4, Ruby has been shown to be ruthless at times when it comes to protecting her loved ones, such as when she nonchalantly cuts off Tyrian Callows' stinger after he manages to injure and poison her uncle, Qrow Branwen. This is most likely a side effect of the traumas she experienced during the Fall of Beacon.

In Volume 6, Ruby further develops as a leader whenever she and her friends find themselves in trouble. This is evident when she directs the group when they are attacked on the Argus Limited and when she stands up to Qrow after he turns down Jaune's proposed idea of stealing a military airship to get to Atlas. Ruby's leadership starts after Ozpin loses everyone's trust and her uncle falls into depression, leaving her to take charge of the group.

Ruby is one of the game's playable characters.

Ruby Rose is a starter Character given to players upon starting the game for the first time, alongside her teammates Weiss Schnee, Blake Belladonna and Yang Xiao Long. She is also classified as a Leader within the game. 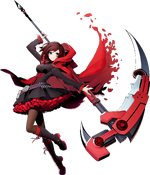 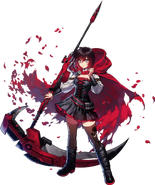 Add a photo to this gallery
Retrieved from "https://fantendo.fandom.com/wiki/Ruby_Rose?oldid=3200904"
Community content is available under CC-BY-SA unless otherwise noted.