Fantendo - Game Ideas & More
Register
Don't have an account?
Sign In
Advertisement
in: Free to use Characters, Characters, What is the New Fantendoverse?,
and 12 more

Rubelline "Ruby" Tifft is a vampire that was Rachel's former roommate for about a year after Rachel's high school years. She was turned into a vampire shortly after the events of Fantendo - Genesis and moved to Seattle due it's rainy weather.

Rubelline has red hair and wears mostly black clothes, usually a black top with black pants that have knee pads. She wears a necklace with a pearl hanging on it. She has two visible fangs and green eyes.

During The Coffin Year, Crow gifts her a bird's skull, which she wears on a headband. She can be seen with this birdskull headband in most of her appearances from that point on.

Described as somewhat loud and mischievous, she often hosts parties at her mansion. She has a sense of self-loathing that becomes apparent when not partying and is under the impression she will not amount to anything despite her now immortal lifetime. She usually keeps up a positive facade around others, although it doesn't take much to make her breakdown.

She tends to be somewhat nervous, but not enough to completely keep quiet. She doesn't keep her own secrets well and will usually blurt out how she's really feeling about things if pressured a bit.

She is rather wealthy and usually throws money carelessly. She has a pet deer named Scalene which she takes care of and seems to be her closest friend. She seems to idolize Crow's lifestyle, but doesn't plan on actually practicing it. She also looks up to F.A.N.T and the Misfits organization, but likewise, is afraid about actually approaching these organizations to see if they would be interested in her.

Rubelline went to Rachel's high school and while was never particularly close to her, she decided to live with Rachel in a apartment for about a year until the two were both well off enough for themselves. While living on her own, she began dating a woman by the name of Veronica Tifft, who was a vampire. Although Rubelline personally did not feel that close to her, Veronica apparently did before she was shot in the heart with a illegal stake bullet. As she died, Rubelline was bit in the neck and became a vampire, passing out. As she resumed conciousness, she found herself in a Tifft-owned hospital. As she was introduced to a new set of powers and abilities, she also learned of the Tifft family and it's traditions, learning that Tiffts only bite spouses or their children. Traumatized slightly by the event, she does her best not to think too much about it.

As she moved to Seattle, she used her new wealth from the Tifft family to construct a mansion and to host parties over there as well as attempt to reacquaint herself with Rachel. She has also has visited the Zaxinian Lifts and knows General Syande from there.

Crow vs the World

Rubelline appears as a patient in Dr. Needlenam RX, introducing the Red Energy Cells mechanic. These Red Energy Cells can only be defeated by using Red Pills and destroy Kathleen Strains when they explode. She can be seen with the bird skull Crow gave her in The Coffin Year around her wrist in a necklace.

Rubelline appears as one of the main characters of the short story, as it revolves around her attempting to plan a date with Syande and Crow. The date seems to go okay until later in the night, where Syande's insecurities get the best of her and she can no longer feel okay being part of the relationship, breaking up with Rubelline over the phone. This seems to have impacted both rather negatively, setting up Rubelline's storyline in Fantendo Smash Bros. Victory.

Rubelline is a vampire and can utilize "suckers" from her palms to suck out blood or use her fangs to suck blood. She can also utilize Red Energy, a hot plasma-like substance that burns like the dickens, however doesn't burn skin or objects, just the sensation of being burnt. Unlike Bang Crimson or FDX-Athens, her usage of the Red Energy is more defensive based, creating energy shields with Red Energy or using it to create armor. She can also summon wings to fly through the night sky, however they burn up in the sun.

Rubelline has weakness to sunlight, hence her location. She can utilize sunscreen or a umbrella to go outdoors, but she finds it super cumbersome and does not bother. 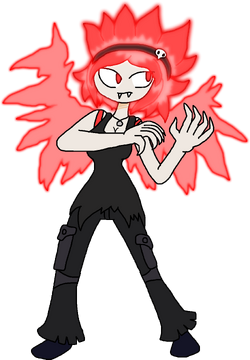 Red Spirit Rubelline Tifft is a transformation activated by Rubelline Tifft that unleashes her true Red Energy powers, which coat around her veins and hair, as well as growing a pair of Red Energy wings. This power can be activated at any time provided Rubelline has the energy to do so- if she is bleeding, she will be unable to take this form. The form has yet to be activated in the New Fantendoverse proper, although it will be activated soon. This form was created in response to a need, not a desire, for more power when it was first activated, although Rubelline has been able to channel it with increasing success later on.

In this form, Rubelline gains the ability to fly without actively thinking about it and use Red Energy in the sunlight without needing sunscreen, where it actually supercharges her powers. She gains a much powerful aura as well. Her Red Energy attacks also become more offensive based, as the Red Spirit form generally disintegrates many attacks that come towards her in some sort of invisible shield.

Red Spirit can actually be used in conjunction with Hyper Mode, although Rubelline has been unable to successfully do this without passing out- it is suspected that she will be able to do this when she gets a better grip of both forms and her body is able to handle both Hyper Energy and Red Energy at the same time.

Was her room mate for about a year after they got out of high school. The Coffin Year reveals that they met relatively early in high school, although they didn't appear to know each other that well until they became room mates. Rubelline has somewhat of a crush on her but is afraid to act upon it, fearing it would be the end of their recently renewed friendship. Rubelline typically does things for Rachel when asked, such as investing in Unten's funeral in A Flash Beorn Our Eyes and joining Rachel and her friends in the battle against The Threat in Fantendo Smash Bros. Victory.

In The Coffin Year, it is revealed that while Rubelline likes to do things for Rachel, she is very much the inverse in asking Rachel to do anything for her, although her hand eventually tips when her family is hunted by Vampire Hunters. Rachel also tends to judge the relationship between Rubelline and Crow somewhat harshly, although warms up on it during the course of the mini-series.

Rubelline first met Syande when she had just become a vampire, and Syande seemed to be telling her things would be okay, albeit somewhat indirectly.

Rubelline and Syande dated for a bit and while their relationship was strong enough to where Syande trusted her with information about her real name, they eventually broke up. Syande felt tinges of jealousy when Rubelline started seeing Crow more seriously and the relationship become more and more distant until Syande finally broke up with Rubelline.

She feels somewhat depressed about it, reeling from it during the events of Victory. She blames and curses herself and even calls herself "greedy". She loses a lot of her lightheartedness and has to put up some as facade. Her interactions with Syande have her more nervous and scared to approach her, knowing she can never win her back. With Crow disappearing for months, Rubelline feels crushed and alone.

After the events of Victory, Rubelline meets again with Syande after she broke up with Miran. The two decide to try a relationship once again, although Rubelline displays extreme caution with their relationship, being sure to dedicate time to her and her alone.

Rubelline is one of the few people that Crow seems to actually like being around, likely because Rubelline allows her to do whatever she wants in her mansion and gives her food and spa baths. The two only seem to be getting closer and closer, to the point where Rubelline notes Crow as a girlfriend.

Crow does geuninely care about Rubelline although her tendency to leave Rubelline alone for weeks or even months on end. During the Coffin Year, she was mentioned to have gone missing until they meet up with her in the forest; she is also said to have gone missing months before Victory and during her break up with Syande. Rubelline seriously loves Crow regardless and Crow does seem to have some affection towards her.

During Fantendo Smash Bros. Victory, it's revealed that after the events of A Red Fall, Crow didn't return to Rubelline's house for months, which Rubelline is clearly upset about. The two get into a somewhat heated conversation, where Crow ends up having to stop her from clawing her own face. Crow decides to leave, although she tells Rubelline she will be back. In the epilogue, she can be seen at the pool with Rubelline, indicating that she has returned.

Views him in a very friendly light, as he used his powers for Rubelline's enjoyment (such as mimicking Syande's voice to tell her that she loved her, and temporarily making her look like Sinicini) during a visit.

Has a very secret crush on her, although she realizes it would never quite work out and mostly keeps it to herself.

Has a very friendly relationship with her, albeit she isn't crushing on her just yet.

Rubelline can be briefly seen gawking at them during Victory's epilogue, hinting at a future development with those two characters. At the moment, all can be said is that she has a crush on the two demon sisters.

Rubelline in The Coffin Year