Not to be confused with Roy Koopa, from the Mario series.

“I will prevail—for those who guided me here, and for all who fight with me today!”
— Roy, Fire Emblem: Awakening

Roy appears as a character in the television series, the Stories of New Tendo City, where he gains the surname Lyon. Athough he retains most of his original personality from the games, Roy is also depicted as a very childish young man, and is often getting on some people's nerves. Unlike the games, Roy is gay, and is in a relationship with Marth Lowell. In addition to being an actor in the popular Fire Emblem historical dramas on television, Roy is also a part time baker at the Royal Bakery owned by Peach and Daisy where his Tie-Dye Swiss Roll is quite popular. He is also depicted as being close friends with both Daisy, and Krystal. 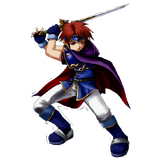 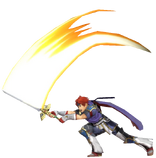