Rowlet (Japanese: モクロー Mokuroh), is a Grass/Flying-type Pokémon. Along with Litten and Popplio, it is one of the Starter Pokémon of Alola.

Rowlet is a cream-colored, egg-shaped avian Pokémon, resembling an owl chick. It has a large, white facial disc that may resemble two spectacles, and it has a long, oval beak in the center of it, with the top part colored white and the bottom part colored orange. Its neck is decorated with a seedling consistent of two dark green leaves, reminiscent of a bow tie. Its underside and legs are white ad its talons are orange. It also has a dark green leaf for a tail, and its wings have an underside of the same color.

As with real-life owls, Rowlet can attack without making sounds. Its lofty plumes allow it to fly silently in the sky, approach its enemies without being noticed, and then attack them with powerful kicks of its talons. It can also attack enemies from a distance by launching its sharp, leaf-like wings towards them.

Also reminiscent to real-life owls, Rowlet can turn its head up to 180 degrees, so it can directly take a peek behind itself. It has a habit to turn its head like that in order to face its Trainer and receive instructions. 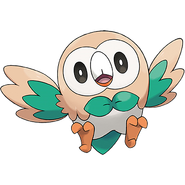 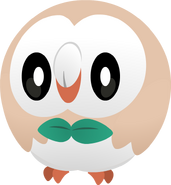 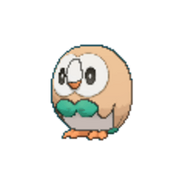 Rowlet may come from rowan and owlet.

Retrieved from "https://fantendo.fandom.com/wiki/Rowlet?oldid=3203228"
Community content is available under CC-BY-SA unless otherwise noted.