Rotom, known in Japanese as ロトム (Rotom) is a peculiar Pokémon of the Electric/Ghost type that appears most commonly in the Sinnoh region. It doesn't evolve, but it is able to change its form and typing by possessing old appliances. Rotom has six different forms:

For the first time in Pokémon Sun and Moon, Rotom is able to possess a special Pokédex and become the Rotom Pokédex. See that article for more details.

In Pokémon Sword and Shield, Rotom takes the appearance of a phone, although it is currently unknown what purpose it will serve.

In all forms, Rotom has an orange, plasmic body, white oval eyes with a horizontal line, and a glowing aura of electricity, which also includes two limb-like lightning bolts that changes shape per form. Rotom's normal form is similarly shaped to a lightning rod and consists of a small, round body, a bigger, round head and a large spike atop the head. Its aura is cyan-colored, its pupils are deep navy and its limbs are shaped like a lightning bolt.

Heat Rotom, being a microwave oven, has an oven-like opening lid on its belly, though keeping the spike on top of it. Its aura and pupils are red and its limbs are shaped like oven mitts. Similarly, Wash Rotom is a washing machine, so it has an opening lid on its belly that is more circular. Wash Rotom has a sky blue aura and pupils, and its limbs are more clip-shaped. It holds a hose with its right limb.

Being a refrigerator, Frost Rotom is larger than any other Form, and has has two closet doors and a tray on its belly. Frost Rotom's aura and pupils are colored purple, and its limbs have a lightning shape as well. Fan Rotom looks more similar to the regular Rotom, but has the spike replaced by a hoop with three fan blades. Its gust-shaped limbs are also placed there. Fan Rotom's aura and eyes are colored yellow.

Mow Rotom, the last of the forms, is shaped like a lawnmower. It has an ovarian head with a handple protruding from it, as well as two black wheels and a tray. It also sports a large grin. Mow Rotom's eyes and aura are colored chartreuse green. Mow Rotom is the only form of Rotom that has one limb of plasmic electricity, and it appears to me shaped like a blade.

Rotom's main ability is to possess electronic devices, which it mainly does to cause pandemonium and scare humans. There's an ongoing research on Rotom, as researcher believe Rotom could become the source of a unique motor. 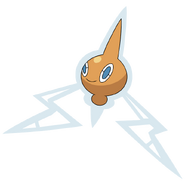 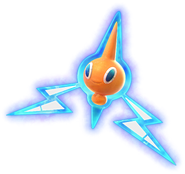 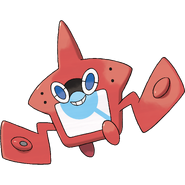 The Rotom Pokédex, an Alola Pokédex that is inhabitated by Rotom. 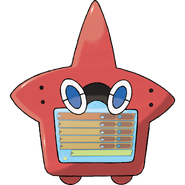 Rotom taking the appearance of a phone in Pokemon Sword and Shield.
Community content is available under CC-BY-SA unless otherwise noted.
Advertisement