Ross Koopa is one of Bowser's several Koopalings. He is older than Iggy, but younger than Roy.

Ross Koopa is quite the prankster, which often gets on the nerves most of his siblings. Despite this, he looks up to his father, Bowser. Ross is also very intelligent, and he is one of the smartest Koopalings.

Ross is fairly short when compared to most of the other Koopalings. He has spiky, orange hair and the top of his head is colored blue. His spiky shell is also blue, as well.

Ross is set to appear as a character in Nutta of da Butta's Koopalings: The Show.

Ross appears as a playable character in Koopalings Quest. 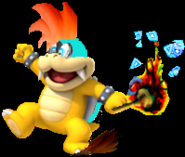 Add a photo to this gallery
Retrieved from "https://fantendo.fandom.com/wiki/Ross_Koopa?oldid=2956679"
Community content is available under CC-BY-SA unless otherwise noted.