Rosie and Posie, are main antagonists of Dark Woods and but acts as Plague Master's support through the first two games and as Ashley's guardians in the third game in a new psychical form. They are the manifestation of the plague.

Not much is known about the past of Rosie and Posie. All that is known is that they have been summoned by Plague Master prior to the events of Dark Woods, and after the destruction of Eden.

Rosie and Posie first appear in Dark Woods at the side of Plague Master at the church when Hein comes to retrieve some of the Holy Water there. They assist Plague Master in his battle against Hein. It seems like they are eliminated in the battle but in reality Plague Master summoned them back into his body when they had sustained too much damage.

In the secret movie upon 100% completion of the game they are shown, in humanoid form, helping Lamia give birth to her daughter with magenta colored hair.

Rosie and Posie have a more active role in the Dark Woods III: The Plague Returns. They now appear in a humanoid form after the death of Plague Master. Apparently before his demise Plague Master infused most of his plague powers into the two in order to give them psychical form and send them away from the battle. Throughout the game they have much interaction with Ashley, acting as her guardians. They give her advice on her next actions and tell her stories about her father, who she's trying to revive.

They are fought a first time halfway throughout the game by Lily and Ligeia who set out to explore the carnival while the others headed into another direction. Rosie and Posie cast the two girls away to a far away part in the Dark Woods after the battle because they came too close to Ashley.

They are fought again, this time by the two chosen characters for the level. They act as the last line of defense before the battle against Ashley. They swore to protect her so their creator could be revived. After defeating them they turn back into their entity forms and disappear.

Apparently they did not die during the last battle as they were summoned back by Plague Master who claimed their powers again. They assist Plague Master in the first battle against him at the church where they also were fought the first time in the game. However after this time they seem to have been permanently destroyed.

Unfortunately they didn't survive the battle that they fought in Dark Woods III. Nostradamus was desperate to have them back, and didn't want to make two blank slates again. With the help of Ashley they ressurected Rosie and Posie, although they weren't what they used to be. They missed any physical form and were more like lingering wills. Ashley however adapted them as weapons against Eight, keeping them save in her Nursury Rhyme sheet. By this time Ashley feels a lot more for the two compared to when she was young, and feels like it is her turn to protect them now.

In the first game not much of their personality was shown and they seemed more like empty vessels at the time. By the time of Dark Woods II and Dark Woods III a good grip of their personality could be seen. Rosie is the more active one of the duo. She always appears to be happy and likes to inflict pain on others. She says she enjoys all things and life but is rather irresponsible and doesn't think about consequences.

Posie on the other hand is the complete opposite of Rosie. She always seems to be depressed and thinks everything that they are doing doesn't have a real impact on the world they are living in. Nonetheless she continues to work for Plague Master because she idolizes him, and says he is the only joy in her life, although Rosie and Ashley seem to lift her spirit as well. She is more serious about situations and always keeps her cool.

Rosie and Posie share most of their abilities, those originating from the plague. Their black hands made out of pure plague are super strong and can enlarge in size, and even stretch themselves. In Dark Woods only their stretch punches are used alongside having the ability to inflict poison on Hein.

In their entity forms in the rest of the games they have several added abilities. One of those is holding each others hands and slamming with their free fists on the ground creating circles of plague on the ground that can inflict poison when standing on them. They can shoot orbs of diseases at the opponent as projectile attack. Another move of them is that they hold their hands and stretch so far away that they horizontally cover the whole area and then quickly spin around, which can be avoided by keep jumping over the arms. Their movement also has been increased as they freely roam the stage during the second battle.

When they are in their humanoid form they retain all of their previous abilities but also get some new ones added. Rosie gets a signature move called 'Disease' in which she sticks her hands in the ground and pillars of diseases emerge from the ground. Posie's signature movie is called 'Corruption' in which she turns invisible and can enter the body of the opponent and rapidly inflict damage on her victim. She however can be avoided with some support abilities or by staying close to Rosie. They also have an ultimate attack called 'Nursery Rhyme' in which they summon a gigantic spider made of plague and ride it. 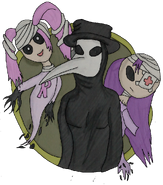 Rosie and Posie in art with Plague Master

Rosie's mash-up with Bleak in the Dualverse 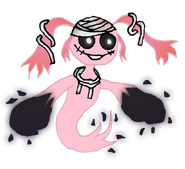 Rosie as she appears in the Medieverse 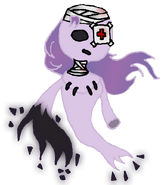 Posie as she appears in the Medieverse
Add a photo to this gallery
Retrieved from "https://fantendo.fandom.com/wiki/Rosie_%26_Posie?oldid=2440620"
Community content is available under CC-BY-SA unless otherwise noted.