Roserade (Japanese: ロズレイド Roserade), is a dual-type Grass/Poison Pokemon. It evolves from Roselia when exposed to a Shiny Stone. It is the final form of Budew.

Roserade is a Small-Medium sized humanoid Pokemon with plant characteristics. Each of its hands are covered in (or are in fact) Roses, with the Right Arm having Red and Left Arm having Blue. Roserade has slender arms that expand out to the roses and shrink towards the shoulders. It has a Bulb shaped body with it mostly being Dark Green with a Light Green arrow like pattern coming up from its legs. Its legs feature a similar slender appearance as the arms do and have one gold-coloured toe or foot on the end of each.

Roserade has what appears to be a Gold Collar around its neck that is connected to its Leaf Cape. This cape is larger on Female Roserades. Its neck has the same Dark Green Colour as its body which extends up the back of its head in a hand like shape. It has white hair that is shaped like a single rose and a Dark Green mask around its eyes. Only its mouth area is light green while its eyelids are gold and its eyes are red.

Roserade appears to be based on a combination of a bouquet of roses, and a mysterious patron of a masquerade ball, in which masks would be worn to hide the identity of the participants. Its mask, cape and the mention of its 'movements of a dancer' in its Pokédex entry seem to confirm this.

Roserade's name is speculated to be a combination of rose and masquerade, due to the fact that the Pokémon looks like it is wearing a mask. 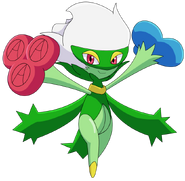 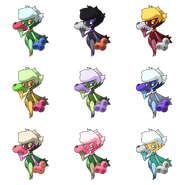 Rumian Roserade from Pokémon Cobalt and Crimson
Add a photo to this gallery
Retrieved from "https://fantendo.fandom.com/wiki/Roserade?oldid=3200786"
Community content is available under CC-BY-SA unless otherwise noted.