Rose is a Siren and a prominent character in the Thorn series, debuting as the main antagonist in Thorn: No Man's Land and transitioning into the role of deuteragonist in Thorn: Hollow Victories. A 'queen' left under the rule of the mysterious Benefactors after a failed coup, Rose has repeatedly hunted for Thorn, both for closure and for the Benefactors.

Rose has black hair with a red 'tint' and red eyes, along with her often seen antennae-like headgear. In her initial appearance, Rose had clean-cut hair and a large red coat over a dress and some metal boots. She also had a prosthetic arm she could remove to reveal a thin sword starting at her elbow.

In Hollow Victories, Rose has much messier hair and wears a black jumpsuit with yellow hexagons. She has a new vest that somewhat resembles her old coat and her cybernetics are much more pronounced, with two long robotic arms that end in glass 'nodes' and spindly fingers.

Rose is deeply determined in everything she does, thoroughly planning and trying to find the best solution. She tends to put others over herself, and she's willing to go through almost anything if she believes it's for the greater good. Although she often acts formal and composed due to her status as a queen, she opens up to those closest to her easily.

Underneath her cool and collected exterior, Rose is often heavily conflicted by her choices, holding heavy regrets when she can't help those in need. She tends to be heavily defensive of her own personal freedom, to the point of losing sight of her ambition to help others.

Rose was born into leadership, her mother Lisianthus having been captured for mysterious purposes by the Benefactors. Rose and her mother lived on Meadow for several years, Rose being subtly trained as a link between the Benefactor council and the Sirens while being allowed to see her mother. Learning from her mother's stories, Rose ultimately decided to stage a coup after Lisianthus died, gathering up Siren soldiers like Thorn and using risky cybernetic procedures on them. With Thorn running from the project before her operation could be done, the attack on a Benefactor meeting failed, and Rose was kept alive only due to necessity.

Rose has increased strength and stamina from her cybernetic implants and is a capable tactician. Her robotics are strong enough to carry things several times her weight, she can convert her hands into blasters, and she can record her surroundings.

After Azalea brought Thorn to Meadow, Rose was forced to act against her, both to finally gain closure on her running away and by the command of the Benefactors. Rose's personal enforcers fell one by one and she was left to confront Thorn all alone, being bested in battle but not before gaining a personal victory over her. Thorn left to fight the Benefactors, and Rose stayed behind, waiting to see how the situation would play out.

Back when this was supposed to be a game, Rose was both a playable character and Thorn's final boss fight, but that didn't quite work out.

After failing to capture Thorn, Rose was brought before the Benefactors and almost got sentenced to death until High Preacher Zavendol stepped in, proposing she be put back on the hunt, with the only options being success or death. Rose was subjected to further modification, giving her enhanced strength and a neurotoxin capsule in her lungs, and reluctantly fought Thorn alongside Forget-Me-Not.

Realizing Zavendol had bigger plans (and that Forget-Me-Not was growing increasingly unstable), Rose joined forces with Thorn and managed to stop Zavendol. Rose almost died as Zavendol managed to activate her neurotoxin, but Thorn managed to save her, getting the two out of the collapsing Hive. Thorn and Rose then set themselves on a course back to Meadow to rebuild both Siren society and their friendship.

Rose pulled Thorn from poverty to join her personal enforcers, and the two have had a complicated relationship since. Initially they held a lot of resentment towards each other - Rose felt Thorn abandoned her, Thorn thought Rose was going too far - but this eventually became begrudging respect towards one another and in Rose's case, a bit of a one-sided crush.

The two could barely keep themselves from fighting, Rose repeatedly insulting him when she felt she had nothing to lose by doing so.

Always thought of him as eerie, but became determined to stop him after finding out his plans. Her fear of him still haunts her even after his death.

Rose barely tolerated Forget-Me-Not to begin with, especially after learning that Forget-Me-Not was attracted to her. Despite all this, she tried to help Forget-Me-Not fight for herself instead of the Benefactors.

Rose in Thorn: No Man's Land

Rose from Hollow Victories, with a different expression. 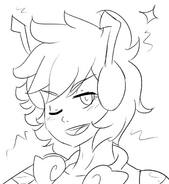