Rosalina and Luma are duo playable fighter characters in Super Smash Bros. Calamity. Rosalina is the adopted mother of star-shaped creatures named Lumas and resides in the Comet Observatory with them.

Colored Luma is determined by the color scheme Rosalina currently has in the match.

Luma respawn time is longer, taking fifteen seconds. In addition it has less health, having 35 HP than 50 HP.

To compensate, Luma's attacks are stronger than the previous game.

New down aerial for Rosalina, a stomp which spikes opponents. 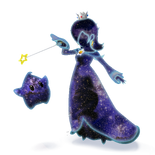 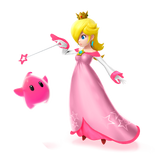 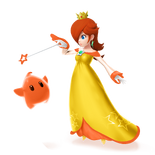 Retrieved from "https://fantendo.fandom.com/wiki/Rosalina_(Calamity)?oldid=2567288"
Community content is available under CC-BY-SA unless otherwise noted.