Rosa Yorkwich is the main protagonists of the Darklight series. She is an orphan who fled her home town via boat in search of an adventure, eventually discovering the long-ruined island of Florisbelli, a magical sword, and one of its sole remaining inhabitants.

Rosa has the body of a child, due to being literally a child. She has blonde hair, which she usually wears in a pair of pigtails sticking out on either side, and emerald eyes. She is usually seen in a knee length dress, and wears a light purple zip-up hoodie over it for warmth. Her Crystal Sword remains sheathed at her back when not in use. When drawn, its blade is semitransparent and rose-tinted, heavily distorting anything on the other side due to its refractive properties.

Rosa is a relatively nice person. She always greets strangers cheerfully and openly, even if they're acting a bit odd. She feels empathy towards those in a bad position, even though she'll rarely have anything she can afford to donate. But she does admittedly have her personality quirks. Chief among them is a massive fear of being outside at night, primarily due to the inability to know what lies beyond the shadows. When stuck outside at night, she becomes far too panicked to know how to proceed. When she's inside, though, she's fine regardless of how dark it is. She thinks that it's because it's easier to know what's around her in the smaller spaces. She is also unbelievably arrogant, and at worst will completely refuse help unless a trusted friend or dire circumstances can convince her to accept it. She's a sore loser and an even worse winner, which makes competing with or against her an exercise in patience.

Rosa loves coming up with names for new things - something she gets a lot of practice at in the unchartered territory of the Florisbelli ruins. Every name she comes up with sounds either dorky or just plain awful, but nobody ever has the heart to tell her. She says her favorite bird is the mockingjay, and she's currently unaware that the bird is actually totally fictional. She almost exclusively eats fast food when she has access to it, which is made marginally healthier by her energetic and active lifestyle, but she still tends towards "healthier" options like wraps and tea. She will eat the largest burger she can find on the menu for special occasions, though.

Rosa is relatively ordinary in most respects, with the exception of her above-average gymnastic ability. She is reliant on the Crystal Sword (which she names Refracture) when defending herself against the supernatural. Due to the semi-transparency of its blade, Refracture can be used to refract light and turn it into a powerful beam - an essential skill when facing the light-based puzzles and traps of Florisbelli, and the trait for which it got its name. It also grants its chosen holder a rudimentary grasp of earth magic, allowing them to create crystal formations around them.

When Rosa obtains the cosmic power of Florisbelli, Refracture merges with it to transform into a powerful blade that Rosa calls Starmageddon. Along with drawing power from the movements of nearby celestial bodies (in Earth's case, the Moon and Sun) to improve its magical capabilities, Starmageddon lets the user freely manipulate the cosmic particulate from which all matter was created at the dawn of time, allowing its wielder to reshape objects freely when given enough time to concentrate. Living creatures reverted into cosmic dust retain their abilities to think, sense, and move freely, but extensive time in this form will eventually lead to insanity and savagery, ending with them becoming dust zombies.

Due to its intense power, however, overuse of Starmageddon carries the risk of overwhelming Rosa and transforming everything around her into dust, so she tries to rely on Starmageddon as little as possible. Additionally, because it draws power from celestial bodies, being in the presence of less orthodox celestial bodies (Dyson's Spheres, artificial planets, etc.) can interfere with the cosmic power, causing the Crystal Sword to revert to Refracture for long periods of time. Either way, the cosmic power spends most of its time in a locket around Rosa's neck, and she only unleashes it in the most dire emergencies.

Rosa was born on September 22. She was abandoned as a child, and grew up in the Yorkwich Home for Lost Souls orphanage. She dreamed of adventure, and eventually ran away on a cargo ship at the age of thirteen to seek an adventure of her own. There, she was nearly caught and sent back to the orphanage, but managed to escape on a life raft. She washed ashore on Florisbelli Island, where she discovered her Crystal Sword and met Scott Mayden, who explained that all life on the island had been destroyed by an ancient weapon that could control cosmic dust, which was now split into multiple pieces and sealed away. Rosa volunteered to help Scott gather the pieces of the weapon and safely reseal them.

Rosa as she appears in Fantendo Smash Bros. Contrive

Rosa, in her second design, by KirbiMiroir.

Concept artwork of Rosa's Darklight '18 design, made in the Gaia Dream Avatar Maker. 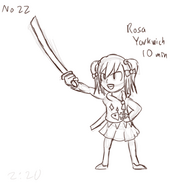