Fantendo - Game Ideas & More
Register
Don't have an account?
Sign In
Advertisement
in: Ink's Stuff, Free to use Characters, Characters,
and 20 more

Ronnie Pepper is the roommate of Mynis and Claire MacBeth, the latter of whom she’s currently dating, and a pizza delivery girl under the employ of Gorgon Pizza Company.

Ronnie is the Omega Prime version of Doomulus Pepper, though she is unique in that she was created before her New Fantendoverse counterpart.

The first two words that most use to describe Ronnie, surprisingly, have nothing to do with her reptilian biology. They are, in fact, “tall” and “lanky.” Ronnie is a full head taller than the average human, and much thinner. Her scales are a dull mustard-yellow in color. Her face is long, ending with an obviously lizard-like snout with sharp teeth. She generally wears a bandage above the nose of this snout, to look tough. Her eyes are large and almond-shaped. Her irises are honey-yellow. Around her eyes are naturally-occurring and rather “tribal” markings. Her “horns” are slicked back like hair, and tinted bright crimson at the tips. Her incredibly long arms end in talon-like claws, which she usually wears gloves and rings on. In fact, so do her just-as-long legs. She has a tail, but it’s a mere stub, and is usually hidden by her clothing. She generally dresses in a short sleeveless jacket, a t-shirt, shorts that end just above her knees, the aforementioned gloves and rings, and a pair of dog tags around her neck.

Ronnie is a bit of a weird case. She’s brash and boastful when she wants to be, and is capable of doing incredible things when she puts her mind to it; but it can be difficult for her to put her mind to much due to her lack of motivation. Her laidback and lazy nature contrast heavily with her loud mouth, and often the combination gets her into trouble. She isn’t too fond of strangers due to some bad experiences with meeting new people. She always prefers to keep to her previously established ring of friends, no matter how messed up or insane that ring of friends may be. She is infinitely loyal to her girlfriend Claire, and enjoys snuggling with her and giving her the occasional piggyback ride.

She sometimes plays a bit of basketball, at which she excels without trying much. (Mostly thanks to her tall and swift physique and just how daunting the idea of getting too close to her razor-like claws can be to the enemy team.) She is a strict carnivore thanks to her biology, and can’t eat vegetables without it getting stuck in her teeth, but has tried tofu and other imitation meats at Claire’s request.

Ronnie’s greatest strength is her natural agility. Her thin physique, long arms, natural flexibility, and monkey-like feet all grant her a nearly-unmatched acrobatic prowess without any prior training. (Which is good, because she’s always been too lazy to train.) Though these bursts of speed can eat through her energy reserves quickly and leave her exhausted, they allow her to move at great speed. Her second-greatest strength is her claws, with a strong enough to pierce brick when enough force is put behind them. She often uses them to climb up the sides of buildings, in the style of the X-Men's Wolverine. Aside from that, though, they generally aren’t useful for much, since the nature of her job means she rarely found herself in combat before meeting Mynis. Though she has the potential to be a ferocious and formidable fighter in battle, she’s a lightweight and has no experience with any proper fighting styles. Anyone tutored in an actual fighting style, especially wrestling, will have a much easier time fighting her.

If you wanna know what Ronnie thinks of another character, feel free to leave a link to that character's page right here! 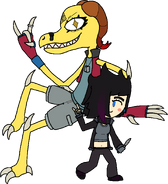 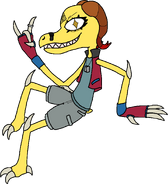 Ronnie with her girlfriend and roommate, Claire MacBeth 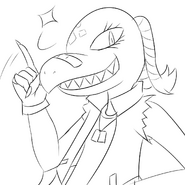 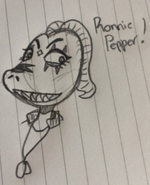 Ronnie siding with Team Flowers in a Splatoon 3 Splatfest 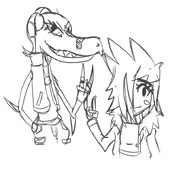 The artwork on Ronnie and Claire's Face Off! card. Drawn by LegendaryHero1023 (t∣b∣c)