Roll is a kind-hearted humanoid robot created by Dr. Light to be a house keeper, helping around Dr. Light's Laboratory by cleaning and cooking. She is the "little sister" of Mega Man and Proto Man. Her dream is to one day open a hospital and help people.

Roll is one of the few female characters in the original Mega Man series, and the only female humanoid robot until Plum and Splash Woman were introduced into the series. In spite of her minor roles in the games, Roll is perhaps one of the most special and well-known characters in the entire Mega Man series, and remains a fan-favorite to many. She is especially well known as the first female character ever in the Mega Man universe. She is also special in a sense that she, with her counterparts Roll.EXE and Roll Caskett and appearances in other media, combined, has made the most appearances of any supporting character in the Mega Man series as a whole. 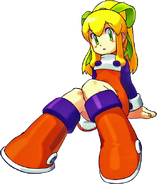 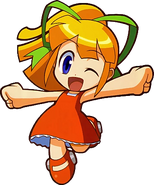 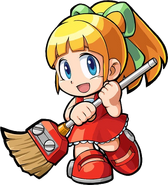 Add a photo to this gallery
Retrieved from "https://fantendo.fandom.com/wiki/Roll_(Mega_Man)?oldid=3042246"
Community content is available under CC-BY-SA unless otherwise noted.