Rokukai "Kai" Morningstar  is a character in the Doom Dome Battle series appearing playable in its first two installments. In the first game he is a small demon, but is a teen in the sequel. He is the main protagonist in Rokukai's Demon Bounty where hunts the rogue demons in Wildefort. A Rokukai from an alternate future also appears as a boss in Warriors of Babylon. He is the son of Lilith and Lucifer, half-brother of Amaya Havens and the current boyfriend of Prince Bucksalot.

In both the games he plays very similar, although there are small differences. Rokukai attacks with his pitchfork which lets him summon giant demonic limbs out of pentagram circles. In the first game Rokukai is significantly smaller than the other characters and has more speed and less strength. In the second game he is a teen who has less speed and more power.

Rokukai's Doom Attack is Nine Circles of Hell. Rokukai summons nine pentagram circles around the opponent in a 360 degree radius. Out of every circle comes a giant fist which stomps the opponent. If it KO's them the circles will gather above the opponent and release one giant fist and completely crushes the opponent.

At a certain point in time Rokukai was born from Lilith and Lucifer. His birth however led to Lilith growing more powerful because of her maternal instincts. Because Lilith was such a threat they locked her up in Pandora's Box and sent her far away. Rokukai didn't seem to age up at all physically, due to the absence of his mother, and at some point decided to flee from Hell with the determination to find his her.

In Doom Dome Battle after the Gates of Hell open, Rokukai escapes from the Underworld in search of his mother. Mephistopheles was tasked to hunt him down. He makes his way to the Wildefort High School where he encounters Prince Bucksalot initially afraid of him but they quickly become friends. Valefar then appears in front of them, saying he is going to capture Rokukai to get a reward from Lucifer, but gets defeated and is send back to the Underworld. When Rokukai tells about his quest and Prince joins him in it.

They make their way through the outskirts of Wildefort where Rokukai explains some things about his mother and that he almost has reached his teens. It is then that they encounter Lieutenant Vexok and Xar and engage in battle after Prince insults their invader abilities. They claim victory and continue until they reach a shrine... but unfortunately there was nothing there. Spook suddenly appears which frightens Prince and triggers Rokukai to fight it.

Afterwards they discover Spook isn't an evil spirit. Spook explains he came here to find something to move on but couldn't. Rokukai explained his quest and Spook joined them thinking he could complete his underway and suggests to look for an artifact in the museum. Kai, Prince and Spook arrive at the museum where they didn't find Kai's mom but did battle with King Hapmon. When they leave the museum they are encountered by Mephistopheles and Gaz and battle them. Mephistopheles says she'd help with the search for Lilith, Gaz says that he will accompany Spook.

Rokukai and the others run into Barbatos and Mai who seem to have the box in possession.  They say that the box contains Lilith and they have to free her for Rokukai. Barbatos declines and says this will make him ruler of Hell. Mai gets angered saying it would grant her the power to safe Joshua. Prince shoots the box out of Barbatos hands and a battle engages between them. In the meantime Rokukai manages to open the box and free his mother, Lilith who looks down upon all of them. After Lilith was freed they all engage in battle with her, but in the end lose to her. Lilith takes Rokukai to the base of the Illuminati where Lucifer is. Mai and Prince follow her.

Just when Lilith and Rokukai enter the building, shortly followed by Mai and Prince, Bavarian appeared. Lucifer was surprised to see Lilith and was rather shocked. Ladilika became furious but she was immediately killed by Lilith. She looked down on the others with a sinister grin. Rokukai said he had to free his mother. Lucifer understood and took Lilith outside. Lucifer and Lilith faced off against each other outside in the most fierce battle ever. It however resulted in a tie and Lucifer asked her to rule again at his side. Lilith was skeptical but accepted, saying that her power was to be feared, and Lucifer certainly knew that. Rokukai joined them and was happy his family was back together.

Rokukai joins in the battle against Soluna and is happy when everything is returned back to normal.

Because Rokukai finally got to learn who his mother was he transitioned into his teen years, gaining a whole different appearance in Doom Dome Battle 2. From this point on he starts dating Prince Bucksalot as well.

Rokukai is the main playable character in Rokukai's Demon Bounty.

After everything was back at peace in the world again, Lucifer thought it would be a good idea for Rokukai to finally get a job in the Underworld. He was given the task of eliminating any stray demons who had fled to the surface and return their souls. However as Rokukai continues doing this he quickly notices a huge amount of these stray demons and suspects there is more behind all of this.

As he goes through the levels he befriends an angel named Seben who has a little crush on him but is fine with being just friends. Together they discover more about what is happening, causing Prince to become jealous in all routes. After going through different scenarios the final truth is revealed. Aries was the one behind all this and wants to rule the Heavens, Surface and the Underworld but in the end gets stopped by Rokukai and Seben. After this Rokukai goes on living his live with his close friends.

While not playable, Rokukai does appear as a boss in Warriors of Babylon, it however is not the Rokukai we're familiar with. Gilgamesh took the Rokukai from an alternate future, the one from the bad ending in Rokukai's Demon Bounty to be exact. Here he eventually came to rule the Underworld with his father being gone and his mother still locked up. All his good quality's disappeared and is a spawn of evil, which he originally was intended to be. He is put in one of the pocket dimensions in the Hanging Gardens of Babylon by Gilgamesh as a trial for Lucifer and Lilith.

A Rokukai from an alternate future in Warriors of Babylon 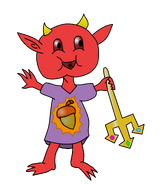 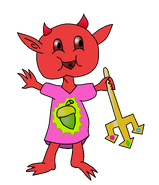 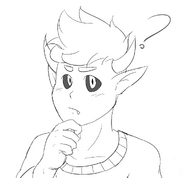 Art by Ziegs (t∣b∣c)
Add a photo to this gallery
Retrieved from "https://fantendo.fandom.com/wiki/Rokukai_Morningstar?oldid=3141415"
Community content is available under CC-BY-SA unless otherwise noted.