Rokukai's Demon Bounty is an open-world rpg video game developed by Dark Heart Games and published by Fantendo. It takes place after the events of Doom Dome Battle 2 in the series and focuses on Rokukai as its main character.

After everything was back at peace in the world again, Lucifer thought it would be a good idea for Rokukai to finally get a job in the Underworld. He was given the task of eliminating any stray demons who had fled to the surface and return their souls. However as Rokukai continues doing this he quickly notices a huge amount of these stray demons and suspects there is more behind all of this.

Unlike the main installments, Rokukai's Demon Bounty isn't a 2.5D fighting game, instead it takes you through Wildefort in an open world environment. You control Rokukai from a third-person view and have to slay the demons by engaging into combat with them in a hack-and-slash-like system. Once you enter a level you can go in three seperate ways; Neutral, Good or Bad route of which the latter two also expand into Hero and Dark routes respectively. But you can switch back to another route at all time, making way for 326 possible stories and 10 different endings. 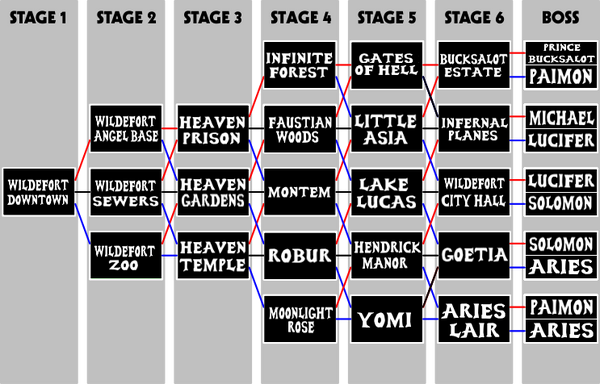 Rokukai can execute normal attacks with his pitchfork with the [normal attack button]. These normal attacks can be extended through leveling up in combat and can become great moves. He can also perform special attacks by summoning the limbs of chained demons in the Underworld through opening pentagram-formed portals. However these attacks can only be used if Kai has enough 'demonic essence', which depletes after using them. Rokukai can replenish essence by slaying demons or by using bottled essence which can be bought from Paimon who appears as a recurring NPC but also appears in every level with a shop at the beginning.

Kai starts out with only Ifrit as his chained demon, who actually is the only one who isn't chained and is friends with Kai, but never is allowed to go near the surface because of his size. Ifrit also enters a second form at the end of the game Infernal Ifrit, which becomes Kai's strongest demon. Other chained demons can be earned by defeating certain bosses, not every boss grants a chained demon.

There is a level-up system in the game, as mentioned before. When leveling up Kai gets a boost in a certain sector, pre-determined by the system. This can be in power, essence, defense or agility. At certain levels Rokukai also gets an extra bonus which he can use to extend his combat combos. These combos branch out in several ways, each having their own advantage, so Kai can choose whichever path he desires.

At a certain point in the game Rokukai gets an ally, Seben, who acts as a second player in the game. From this point on the the game the Co-op option becomes available. Seben also levels up and also has his own branches to expand on. Instead of being able to summon chained beasts Seben can heal himself and Rokukai.

Treasures are scattered throughout the game which can be found by Rokukai and contain certain items, collectibles or even an alternate costume for him. These treasure can be found with the help of Barbatos. He grants you a communication rune at the start of the game with which the treasures can be tracked, as Barbatos desires the collectibles. Some treasures also are key items in the game which are needed to progress. Barbatos can be summoned with the machine as well to deliver colletibles for awards.

The game takes place in many different areas. Most of the areas are located in Wildefort, for example the first two stages play entirely in Wildefort. However all of the third stages are in the Heavens. Stage four levels go slightly outside of Wildefort, touching the locations that also appear in The First Summoning and other woodland areas. Three of the stage five levels take place in Wildefort, atlhough Hendrick's manor is on the border. The other two are in the Underworld, although Yomi is entered in Wildefort. The levels of the last stage vary from the Underworld, to Wildefort and locations with an unknown precise location.

These characters appear in the game to provide support in the levels. This may either be by giving advice, selling things and/or fighting alongside of the boys. Some of the supporting character may also be bosses in the game, but will only be listed here.

Seben, a new main character in the game

Aries, the true villain of the game
Add a photo to this gallery

Retrieved from "https://fantendo.fandom.com/wiki/Rokukai%27s_Demon_Bounty?oldid=2243156"
Community content is available under CC-BY-SA unless otherwise noted.