The episode slowly opens as we see various shots of Le Secluded Isle. The camera pans around the mansion on top of the island as the moon shines down upon it. We follow the camera near a window on the mansion's first floor, which leads us to a large art gallery. We see Rogue sitting at a desk, writing letters.

Rogue: Hello, viewers! This time, I've prepared for your potential arrival! I even started to pretend I'm doing a monotonous task to fool the filming crew...god, I'm clever.

Rogue: But enough about that! This time, I prepared for everything! I even chose a friend of mine to cover today! And...y'know, ever since I covered Bowser, I've been in a platformer mood. I want to cover one platformer villain from all of the big three gaming companies: Nintendo, Microsoft, and Sony. And it took some work to find a good candidate for the Microsoft part. I mean, the Xbox One is swimming in a sea of gritty buff white men holding guns with a brown color palette, for God's sake!

Rogue: So, who did I find to cover today? Well, I just want you to know that we get along like bears and birds. I met her during 1998, and she's been one of my best friends ever since. She's moved from Nintendo to Microsoft, though, but she still retains her wicked lifestyle. I'd like to introduce to you today...Gruntilda Winkybunion. 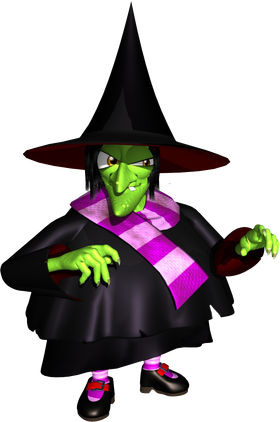 Don't believe me? Well, let me prove it.

Let's start off with the first game in the Banjo-Kazooie timeline: the original Banjo-Kazooie in 1998. Here's the plot: Gruntilda kidnaps Banjo's sisters, Tootie, and plans to steal her beauty. If she succeeds, Tootie looks like a monster while Gruntilda comes out looking like...

But this ties into Grunty's character. She wants to change into something that she isn't: beautiful on the outside.

Retrieved from "https://fantendo.fandom.com/wiki/Rogue%27s_Gallery/Gruntilda?oldid=2307091"
Community content is available under CC-BY-SA unless otherwise noted.