Rocky Wrenches are mole-like enemies, originally turtle-like, that pop out of manhole covers and attack foes by throwing wrenches. Rocky Wrenches work for Bowser's Koopa Troop, often appearing on airships and tanks. Upon sighting either Mario or Luigi, a Rocky Wrench will pop out of its hole on these vehicles and throw wrenches at them before descending back into its hole. In Super Mario 3D Land and 3D World, it may throw Bob-Ombs instead.

In some cases, a defeated Rocky Wrench will reappear, even when defeated by a stomp (it can be said they are stunned by being stomped). However, some Rocky Wrenches are permanently defeated when attacked. In newer appearances Rocky Wrenches look more like Monty Moles.

Rocky Wrenches appeared in one Koopa Kart game so far, being the one with the most enemies, Super Koopa Kart as medium weight drivers.﻿

The fourth track of the Buzzy Beetle Cup in this game is DS Airship Fortress. The original version of this track had Rocky Wrenches on them, and they return for this game's version of the track, albeit with a somewhat big change: They now actually throw wrenches, and occasionally Bob-Ombs. As such, you have to be on your toes a lot more in their zone. 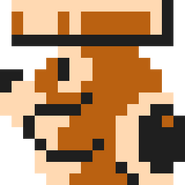