A Rock Mushroom is a power-up in the Mario series. It is needed for Mario to transform into his Rock form, Rock Mario. This item is usually found in areas like mountains or caves. It can appear also in environments with little or no grass and/or with lots of rocks and sand. It is an item that normally Mario is able to use for transformation.

Rock Mario can turn into a boulder and can bowl into enemies and objects. However, if Rock Mario bowls into an object hard enough, he will still be Rock Mario, but not be a boulder anymore. He can still become a boulder at will.

The Rock Mushroom made its first appearance in Super Mario Adventures: The Series. It appeared as a power-up only Mario could use. If Luigi, Wario, or Waluigi touched the Mushroom, they would simply pass through it. If Mario, however, touched it, he would transform. The Rock Mushroom appeared in the Bouldy Boulder Mountain, Rock Hills, Mostly Ghostly Mansion, and Bowser's Castle levels.

The Rock Mushroom appears in World 6: Bullet Mountain. Like in Super Mario Galaxy 2, Rock Mario can turn into a rolling rock and is heavier. However, in New Super Mario Bros: 3, Rock Mario's Ground Pound is more powerful and he can throw rocks.

The Rock Mushroom appears during the Boulder Smash Bros. Attack in Mario & Luigi: Sage Quest, where Mario eats one to turn into Rock Mario as the main part of the move. 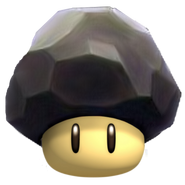 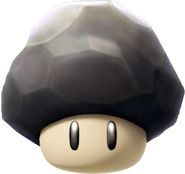 Mario Kart Havoc
Add a photo to this gallery
Retrieved from "https://fantendo.fandom.com/wiki/Rock_Mushroom?oldid=3218504"
Community content is available under CC-BY-SA unless otherwise noted.