Rock Mario is a Mario's Power-Ups usable by Mario in Super Mario Galaxy 2. It's accessible via a Rock Mushroom.

Whenever the player shakes the Wii Remote, Rock Mario makes uncountable rocks appear out of nothing, and makes himself into a boulder with help of those rocks. As a boulder, Rock Mario rolls at incredible speed, crushing any enemy in his way, and cannot stop until hitting a thick wall.

Rock Mario appears during the Boulder Smash Bros. Attack, where Mario eats a Rock Mushroom to turn into Rock Mario. 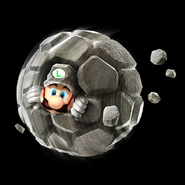 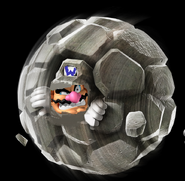 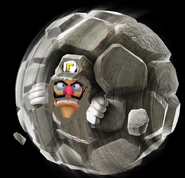 Rock Waluigi
Add a photo to this gallery
Retrieved from "https://fantendo.fandom.com/wiki/Rock_Mario?oldid=2750555"
Community content is available under CC-BY-SA unless otherwise noted.