Robirdo is a boss from the Super Mario series. As its name implies, Robirdo is a robot whose design is based upon the other Birdo enemies that exist as members of Wart's army, the 8 Bits. Appearing solely in Super Mario Advance, a remake of Super Mario Bros. 2 for the Game Boy Advance, Robirdo appears as the boss of World 3-3 and replaces the second battle against Mouser (who, in turn, replaces the second battle against Tryclyde in World 6).

In addition to the basic attack used by the normal Birdos throughout Super Mario Advance, Robirdo has two other attacks that make the battle against it more difficult in comparison. Its most basic attack, which it shares with the Birdos, simply sees Robirdo fire a large egg from its snout-like cannon. In addition to this, Robirdo will also charge across the screen at a high speed and perform a ground pound to paralyze Mario, Luigi, Peach, or Toad throughout the battle, using these after the robot has taken any amount of damage.

Robirdo is voiced by Jen Taylor in Super Mario Advance, who also voices Birdo, Peach, and Toad in the same game.

True to its name, Robirdo greatly resembles the Birdo enemies encountered throughout the events of Super Mario Advance. Being a robot, Robirdo's appearance is clearly far more mechanical in nature, with major differences being that it possesses two-pronged claws instead of hands and a set of four wheels as opposed to two legs. The greatest difference between Robirdo and the enemies it is based on is that Robirdo is significantly larger in size.

Robirdo appears as a playable character in Jake's Super Smash Bros. Though Birdo also appears in the game as a playable fighter, the two only share a single special move: their neutral special moves, respectively referred to as Egg Cannon (Robirdo) and Egg Fire (Birdo), see the two characters firing an egg from their snout. Despite this similarity, the two characters' eggs have different properties, with Robirdo's being larger than Birdo's and travelling through opponents rather than shattering on contact. For its Final Smash, Robirdo summons the hostile Mask Gate from the final level of Super Mario Bros. 2, who flies around the screen at a high speed to deal damage on contact with foes.

Robirdo makes its debut in the Mario Kart in Jake's Super Mario Kart. Robirdo's size makes it one of the largest and heaviest characters in the game, and consequently the robot also has high speed. Due to these advantages however, Robirdo's other statistics (acceleration, handling, and traction) are weak. 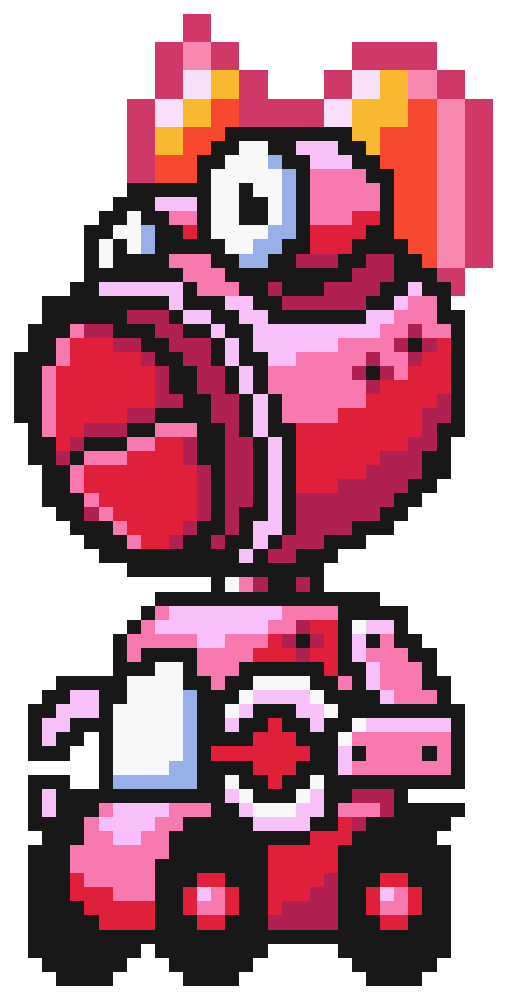 Jake's Super Smash Bros.
Add a photo to this gallery

Retrieved from "https://fantendo.fandom.com/wiki/Robirdo?oldid=3062208"
Community content is available under CC-BY-SA unless otherwise noted.