RoJo (real name Ronan Johannson) is one of the many playable characters featured in Iliad Online, and acts as the unofficial mascot for the project. A self-proclaimed vigilante from the small mining town of Redscale, RoJo's attempts at making a difference by fighting crime turned out fruitless initially; however, his fighting spirit and determination made him a surprising candidate for the mysterious hero group known as the Iliad Organization.

RoJo likes to consider himself a cool kid, the kind of classic delinquent figure featured in movies that he and his mother used to enjoy. Truthfully, he is rather antisocial and stand-offish, seeking to perpetrate the "cool guy" persona but coming off as overly aggressive or unappealing to most people. As such, he tends to drive people away or do stupid decisions to keep up the visage- such as dropping out of school to become a vigilante- and he tends to become confused and sad when incidents occur where he is negatively impacted by this.

RoJo has a heavy sense of justice and will usually put himself in harm's way to help others, but he is rather hotblooded and tends to act before thinking, leading to this heroic instinct getting him in danger rather often. He's also rather thrifty, being knowledgeable about how to effectively spend money and acting as a very charitable person; it's rumored he even calculates the spending budget for the Iliad Organization.

Despite his rough, violence-loving demeanor, RoJo is shockingly good with kids, and has become great friends with fellow Iliad Organization members Phorine and Drifter.

RoJo's body and skin tone are distinctly Chiquitan, due to growing up in the small town of Redscale; his dark hair, in contrast, is Harenmarkan in origin, believed to stem from his father's side of the family. He is rather muscular overall, and this is believed to be primarily natural rather than his self-appointed workout regiment.

His typical outfit and the one he is most commonly seen wearing consists of an orange shirt with a strange insignia on it, a leather belt, torn blue jeans, and a stylish dark red jacket. Usually, he tends to wear both a hat and shoes that match the color of his jacket, with these accessories decorated with studded metal plates. He also tends to wear fingerless gloves, though the glowing red indents spiking out of the knuckles are actually his own bone rather than part of the gloves.

RoJo is a self-taught vigilante, and while he is not a master of any given martial art, he has combined multiple fighting styles to create his own form of combat. One of his most powerful moves is his signature Dust Knuckle, a mighty punch that channels energy throughout his body into one powerful blow. Overuse of this skill has interestingly caused his hand bones to radiate with red energy, as well as bone overgrowth that has effectively caused him to grow organic spikes on his knuckles.

Even without his martial artistry skills, RoJo is still exceptionally strong, and is capable of breaking sturdy materials at record speeds. His body is also capable of moving incredibly fast in short bursts, enabling him to strike an opponent with rapid-fire punches or quickly dodge attacks. This tends to rapidly eat away at his stamina, leading to his policy of finishing fights as soon as possible.

RoJo is one of the game's many playable characters, and the unofficial mascot due to appearing in much of the game's promotional material. This being his introduction, much of his background is told via NPCs in the Redscale map.

RoJo is one of the playable characters in this spin-off fighter. Though much of his moveset and capabilities are directly based off of his appearance in Online, this game introduces his "Redscale Native" super ability, consisting of a minecart summon and raining crystals. 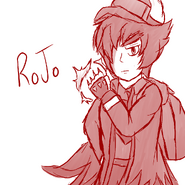 Retrieved from "https://fantendo.fandom.com/wiki/RoJo?oldid=3205909"
Community content is available under CC-BY-SA unless otherwise noted.