Riki (リキ; English dub: /ˈrɪki/ ) is one of the seven playable characters in Xenoblade Chronicles and a member of the mercantile Nopon race. Although he looks like a child, he is actually 40 years old and six of his children can be found in Frontier Village. In the English version, Riki eventually reveals (during a side quest) that he has a total of 11 children. A natural story-teller, he will go on at length about how he is actually a legendary hero spoken of in Nopon prophecy. He seems to eat a lot despite his small size, a trait shared by his children, and he accompanies Shulk and the group as a way to pay off the heavy debts that have arisen from this.

The party is first introduced to Riki in a short, humorous scene. The characters are seemingly unimpressed with the compact hero and are unsure what to make of him. This does not improve upon learning that Riki expects them to find equipment for him, too.

Riki informs the group that his reason for being the Heropon (chosen legendary warrior for the Nopon race) is that he owes "lots of monies" to the people of Frontier Village. However he does mention that they will forgive his debts should he successfully slay the "Dinobeast" that has been plaguing Makna Forest.

Upon finding the Telethia, Riki becomes quite angered with the way "his Makna Forest" has been damaged. Melia mentions that Telethia will absorb Ether from the surrounding environment. They engage the beast in battle.

After the fight, Riki takes most of the credit back in Frontier Village for slaying the "Dinobeast", even though according to the rest of the group, he did not actually do very much.

In Xenoblade Chronicles, Riki could be described as a combination of Black Mage & Thief, thanks to his debuffs and pickpocket skills, although he does not have as high base damage arts as other characters. He has fairly good moves for inflicting status ailments onto enemies. He will not inflict as much damage due to lack of fire power, but most of his offensive arts inflict status effects, meaning he can inflict considerable amounts of damage over time. He can learn to steal EXP, AP, and stats from enemies, too. Riki also has the highest hp stat of any of the playable characters, and although he initially can only wear light armor his later skill tree Heroism allows him to equip heavy armor. He does, however, have one downfall: due to his height, he tends to swim rather than walk in water (even water shallow enough for the other party members to walk in), making him useless in water battles.

In Super Smash Bros. for Wii U and 3DS

Riki appears in Super Smash Bros. for Nintendo 3DS / Wii U during Shulk's Final Smash, performing a Chain Attack with Dunban and Shulk. He also appears as an Assist Trophy, using a variety of arts such as Happy Happy, Freezinate, and Yoink!.

No info available yet. Please add onto this if he's in your game! 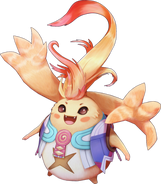