Fantendo - Game Ideas & More
Register
Don't have an account?
Sign In
Advertisement
in: Free to use Characters, What is the New Fantendoverse?, Pansexual Characters,
and 8 more

Ricina Crownvetch is an Vineborne from the planet Alfheim, one of the planets connected via the Yggdrasil tree. They were born from the tree themselves, which is coated in vinelike snakes that produce beings based off what they eat. In the case of Ricina, she was borne from a light elf skeleton before emerging out from the vines. Living off the Yggdrasil trees as well as planting seeds in her wake, Ricina is a cosmic botanist who uses Yggdrasil to create powerful toxins that can do various things to the bodies of her victims. Ricina was created by Exotoro (t∣b∣c) as a character to expand more of Yggdrasil's lore and to create a "poison queen" concept character that was requested by FuchsiaPanacea (t∣b∣c).

Ricina is a cosmic botanist who uses Yggdrasil to journey from planet to planet, restoring plantlife in her wake via her botany skills and producing strong poisons that they can store in their needle arm and tail. She wishes to travel across the whole universe, maybe even the multiverse. They are seen as the dark version of Susan Syringe.

Ricina is fairly humanish looking on the surface, but features big eyes with distorted yellow pupils behind thick glasses. She has black hair with metallic antennae-like horns on the back and front of her face. She also has a gas mask hooked to her face with a long cord that connects to what appears to be a mechanical mouth. Underneath the mask is nothing, meaning the mechanical mouth is mostly so she can talk. She absorbs what she needs through sunlight and water via photosynthesis. Hanging above her head is a green floating crown. She wears a purple dress that splits off into a floral design. She wears long, arm-length gloves. She has legs, although because she can fly to a limited extent she appears to have none on first glance. She has elfish ears because she is borne of a light elf skeleton.

Ricina is a fairly collected character who seems villainous and psychopathic on the surface but has fairly mundane reasons behind what she's doing. Actions like ensnaring a building in plants or poisoning someone all have actually innocent reasons behind them, such as her not understanding the purpose of a building and instead seeing fit to restore nature there or putting someone to sleep because she thinks they're exhausted and needs rest. She has stress breakdowns where she will slam her head against the wall or other blunt objects, often growling really loudly.

She believes Yggdrasil is her god, and with good reason as it connects her to other places in the universe and technically is responsible for her creation. She relies on it for everything, from food to her poisons. She is never seen too far away without a Yggdrasil tree. She carries out it's will, which she believes to be to plant the universe with plant life.

Ricina has a motherly streak inside her, often taking care of people by numbing their pain when possible. She cares deeply for people she has a close connection with and is largely empathetic. She can act like a nurse for people, caring for them when they fall ill. She is fairly possessive of people she cares about and does not like to see the people in her life that she loves leave her.

Ricina produces poison naturally through her body's glands, although can make it stronger with Yggdrasil's offerings like Mana and its roots, which drip a mysterious red-brown liquid. Her poison ranges from sweet to bitter in taste, yet can have various effects. She stores it in her syringe arm or her tail.

Ricina also possesses the ability to channel Abyssal, the antithesis to Aura. The Abyss that Ricina possesses pulls from the lack of plants on a given planet, which is actually contradictory to her goals. That is because she does not actually care how much power she has, but if it comes down to it, a planet that is being stripped of plant-life will make her strong enough to take on this force. It is strongest on Xicicle due to its barren ground, making it near impossible to plant things there. Her Abyssal is purple colored. 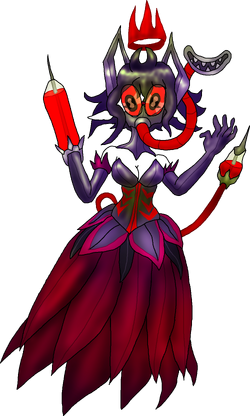 Dark Abyss Ricina Crownvetch is the name of a Abyssal transformation that Hazel can take on while on the planet of Xicicle, due to Xicicle being a barren wasteland where plantlife doesn't grow. It's location in the universe also makes it a fairly powerful conduit for Abyssal energy, but Ricina is drawing her power from the lack of plant life, which can be somewhat of a boon for her if it's location was somehow moved instead. Her power is increased plentiful.

Dark Abyss Ricina takes on a new coloration while in this outfit, swapping to a black and red look with hints of her old coloration. Her glasses become blood-red sunglasses instead. She additionally swaps all her poison for blood, which she stores in her tail and needle arm. She becomes somewhat mosquito-like in this form, helped by her increasing flight powers.

Dark Abyss Ricina uses the blood she absorbs from victims to craft new types of poison that poison concepts about a person. Their name can be be poisoned, making them take damage every time it's mentioned, or their sanity can be effected instead, making their mental wellbeing slowly take damage over time. One particularly powerful ability she has with these blood poisons is that she can slowly overwrite their personality with a "poisoned" one, making them act in a way she personally desires. The blood type of her victim effects how long her effects last on them- they are a super-powered version of her specialized poisons.

Getting poisoned multiple times by the blood poisons can build up an immunity unless mixed with someone with blood type B, in which the immunity will reset.