Richter Belmont is a major character of the Castlevania series, debuting in the 1993 PC-Engine game Castlevania: Rondo of Blood, with a heavily altered pseudo-sequel releasing on the SNES as Castlevania: Dracula X (or Castlevania: Vampire's Kiss in Europe) releasing a year later. Richter is a descendant of Simon Belmont and a member of the Belmont Clan, a family who dedicated their whole live to defeating the recurring evil Dracula.

Despite being part of a bloodline of strong warriors, Richter is considered to be one of the strongest Belmonts and helped to vanquish Dracula in 1792 A.D. and again seven years later, alongside Dracula's son Alucard. After the events of Symphony of the Night, Richter vanquishes from history, leading to an era of absence of the Belmont clan, which lasted from the 1800s until Dracula's final demise in 1999, at the hand of the last known Belmont, Julius.

Richter is a fan-favorite Belmont thanks to his appearances in both Rondo of Blood and Symphony of the Night, both considered to be the best Castlevania games of all time. Thanks to his popularity, he would appear as Simon's Echo Fighter in Super Smash Bros. Ultimate, with many of the moves utilized by Simon being originated from Richter, including their shared Final Smash, Grand Cross.

Richter is the descendant of Simon and Juste Belmont and by far the youngest by the time duty called to slay the recently revived Dracula, as he was only 19 during the events of Rondo of Blood. Richter has a strong sense of justice and unwavering will, recognising Dracula as a monster that shouldn't belong to this world. Richter is willing to go out of his way to help those indeed, as during the events of Rondo of Blood, he rescues Maria Renard, a distant relative of his with the ability of utilizing animals in combat as well as three maidens kidnapped by the evil wizard Shaft, Tera, Iris and Annette, his girlfriend.

After defeating Dracula, Richter's whereabouts were unknown but seven years later, he performed a sudden betrayal against humanity by ressurecting Dracula himself. With the Dark Lord revived by the one that slain him, another hero came along to try and stop Dracula again, this time, his recently reawakened son Alucard. During his battle against Richter, Alucard, with the help of an older Maria who was unable to stop the changed Richter, was able to notice that Richter was being manipulated against his will by Shaft. Releasing him from his control, Richter eventually joined forces with Alucard to stop Dracula. After Dracula's defeat, Richter vanished from history, leading to an era without Belmonts.

Richter's main ability is to be able to use the Vampire Killer, a blessed weapon that is capable of defeating a host of numerous creatures with its whip. Alongside the Vampire Killer, Richter is also able to utilize sub-weapons, such as the axe; a flying projectile that travels an arc, Holy Water, which creates a small wave of fire wherever it lands; daggers, which are fast horizontal projectiles; the Cross, which acted as a boomerang and finally, a Book, which spins around Richter continuously for a while. While other Belmonts could utilize these sub-weapons, Richter was the first one to be able to utilize an ability known as Item Crash, which is a way stronger version of each sub-weapon that requires a lot more in order to be used. The Item Crash are usually attacks that cover a major portion of the screen and hit everything multiple times, making them very effective.

Alongside these offensive abilities, Richter also had better mobility than his ancestors. Richter was the first Belmont capable of performing the Somersault, a backflip in midair that is activated by pressing the jump button twice. In Symphony of the Night, Richter's moveset was expanded to include other moves such as a slide that could be linked with a flying kick, a flying uppercut and a blade attack, which Richter performs by tackling forwards while rotating a blade around him. These would serve as the basis for some of his and Simon's moves in Super Smash Bros. Ultimate.

None yet, feel free to add your game on this section if it includes Richter!

Richter, as he appears in Symphony of the Night.

Richter, as he appears in Harmony of Despair. 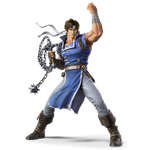 Richter as he appears in Super Smash Bros. Ultimate.
Add a photo to this gallery

Retrieved from "https://fantendo.fandom.com/wiki/Richter_Belmont?oldid=3289049"
Community content is available under CC-BY-SA unless otherwise noted.