RhythmWare is a 2017 music game developed by Intelligent Systems and Nintendo for the Wii U console. It is a crossover between the Rhythm Heaven and WarioWare series, making it the first rhythm game crossover.

RhythmWare is a crossover between the WarioWare and Rhythm Heaven series that features various "microgames" that require you to press buttons in time with a stage's certain music, each stage acts out very similarly to the Remixes in the Rhythm Heaven series. There are many control schemes that can be used such as the Wii U Gamepad's touch screen, A and B buttons, ZL and ZR buttons, and the Wii Remote's motion sensing feature.

Single Player lets one player go through the entire story of the game. When a stage is completed, the stage itself and the microgames inside it can be played in the multiplayer mode.

Multiplayer lets up to four players go for the highest flow score. Players can either play on a certain stage or an extended microgame.

The Gift Shop is where players can buy Rhythm Toys, Endless Microgames, in-game music, collectibles, and more. The toys and microgames can be played in the single player mode while the music and collectibles can be viewed/listened to inside the gift shop mode.

The Character Creator in the game allows you to create your very own Rhythm Heaven verison of yourself, The creator also lets you dress up your characters with items recieved from playing stages and microgames.

After working for ten years on it in his lab, Dr. Crygor finishes his rocket ship which could fly to outer space. He gave Wario and everyone else an invitation to fly in it and test it out. A few days later, they all arrive at his laboratory. Wario, being hungry, decides to run inside the rocket and search for free food. However, he accidentally presses a few buttons in the rocket, causing it to malfunction and go where it wasn't supposed to. A few seconds later, everyone arrives in a place called "Rhythm Heaven". They exit the rocket and find three monster-like people who introduce themselves as Marshal, Miss Ribbon, and Cam. Wario believes that he could make a lot of money selling microgames in Rhythm Heaven, and decides to make a deal with the trio of inhabitants. They all collaborate and create a new company, RhythmWare Inc..

“Wa?! That marshmallow guy (What was his name? Michael? Mark?) has a better computer than me! I better go snatch thi-WAAA! Where am I? This-a looks like his computer's software! Oh no! I'm-a ruined! Hey, you! Complete these microgames and help me out!!”
— From, Wario
First Things First is the first stage of RhythmWare. It is hosted by Wario himself and is themed after personal computers and their interface. There are only three microgames in the stage and is fairly short. Similar to being trapped inside a clock in WarioWare: Twisted!, Wario is sucked into a "Nintendo FunBook".

Even a Baby Could Do It! (Wario & Marshal's Stage)

“Hey, what happened to my FunBook? It's broken! Well, it's a good thing me and Wario have a few pre-existing microgames to put in this stage! If your rhythm is good enough, We might be able to purchase a new computer and make new microgames! So do your best!”
— Thanks, Marshal
Even a Baby Could Do It! is the second stage of RhythmWare. It is hosted by Wario and Marshal and features microgames that are from previous WarioWare and Rhythm Heaven games.

“Me and Young Cricket share a passion for karate and kung-fu. We were going to the Rhythm Dojo together, only to find out that it closed down and is now abandoned... Hmm, maybe we could work together to rebuild it...?”
— Sayonara, Karate Joe
Dojo Dreams is the third stage of RhythmWare. It is hosted by Young Cricket and Karate Joe and features ninja and karate themed microgames. The story revolves around the two friends rebuilding the Rhythm Dojo for everyone to enjoy.

“Woohoo! I cannot wait! The New Funtendo 4DS XL is coming out tomorrow with some brand new games as well! Well, I better get a good night's rest so I can pick it up.”
— Good night, 9-Volt
Nintenbros is the fourth stage of RhythmWare. It is hosted by 9-Volt and Cam and features Nintendo themed microgames. The story revolves around both characters walking to the local game store to pick up the New Funtendo 4DS XL handheld only to find out that they're all sold out.

Even a Baby Could Do It! (Wario & Marshal's Stage) 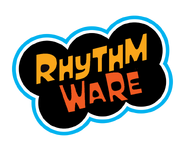 Promotional artwork showcasing various characters and their collections
Add a photo to this gallery
Credits
Retrieved from "https://fantendo.fandom.com/wiki/RhythmWare?oldid=2842249"
Community content is available under CC-BY-SA unless otherwise noted.