Start a Wiki
Reubell is the fairy helper from The Legend of Zelda: Spirit of Darkness, who makes a small appearance in Super Smash Bros. Ω. She is also a major character in The Super Nintendo Show, and is voiced by Bella Thorne in the cartoons.

Reubell looks like Navi, Ciela, and Tatl, instead of looking like Great Fairies, or original fairies. However, in the cartoons, she looks like Spryte, with yellow hair and a yellow dress to take place of her yellow glow.

In Spirit of Darkness, Reubell takes the role of Navi. She follows Link and Tinker (mostly Link) around, giving them hints and Targeting for them.

In Omega, Reubell makes a very minor appearance as Young Link's taunt. She flies around him and then targets a random opponent, who she follows for the rest of the match- or until Young Link taunts again.

In The Super Nintendo Show, Reubell takes a similar role as in the game, but has a drastically different appearance. She also is shown to have a small crush on Tinker occasionally, but Tinker is often annoyed by her. She is very close to Link and is once shown to be jealous of Tetra, but only for one scene. 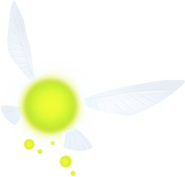 Promotional artwork of Reubell for the cartoons.
Add a photo to this gallery
Retrieved from "https://fantendo.fandom.com/wiki/Reubell?oldid=3203988"
Community content is available under CC-BY-SA unless otherwise noted.