“You try to kill me? That’s just business. You try to pretend you have authority here? I’m not in a position to tell you not to be delusional. But trying to destroy a guy’s collectible? Dick move, man. ”
— Reten, laying down a wisdom.

Reten is Unten's counterpart from an alternate universe. Unlike the other Alternate Untens Reten actually played some part in the destruction of his Zeon and later his entire universe.

Reten is a tall and gangly beorn with thicker and fluffier fur, kept pristine by a large amount of furcare products. He has white sclera and black star-shaped pupils, unusual for a beorn and sharpened teeth. He wears a metallic necklace that contains his Cyrium armor and allows him to manipulate Power Harmonious. Over this he wears his signature orange coat with a black fur collar and white edges. His left ear is pierced, usually having his Galvan Earring attached.

On the surface Reten is a confident and charismatic killer who always seems to be a step ahead of his opponents. While most would presume that Reten was simply a cocky smartass who got by on dumb luck and instinct he is in fact quite intelligent, though he is just as good at masking this so that others would underestimate him. He's a bit of a megalomaniac, constantly seeking sources of power in order to protect himself and the few people he cares about. There are few means he would not go through with in order to reach this end. In comparision to his counterpart Unten Bluzen Reten has no form of no-kill policy, having no qualms with dispatching with his foes. That is not to say that Reten would always kill those he fights; in various cases he has left his opponents alive for various reasons. What he does share with Unten is a tendency to fall into prophetic dreams, though less often and with less clarity than Unten's. Reten takes in the information of these dreams though the hints they provide seem to not be as immediately relevant and much more surreal, hence why he doesn't tend to mention them. Reten struggles with what most would consider a peaceful life. In times where there is no immediate danger Reten tends to work to fight future threats he isn't even sure exists yet due to a deep fear of any actual peacetime causing him to "go soft" or otherwise negatively impact him.

He finds it hard to truly connect with people but all too easy to pretend to bond with them to further his own goals. However, he is almost obsessed with keeping those he truly considers friends safe due to how few-and-far they are.

Reten is a quick, vicious and dastardly fighter who is adept in both melee combat with his claws and ranged combat in his seemingly endless array of firearms. He is fully willing to use dirty tricks, mind games and low blows to get the edge in a fight.

Reten's body is embedded with Power Harmonious, which manifests as a metal band around his neck. From this necklace Cyrium manifests in shards to coat Reten in armour of varying degrees. Reten can utilize this Armoured form to gain more defensive and offensive options at the cost of speed due to the weight of the armour. 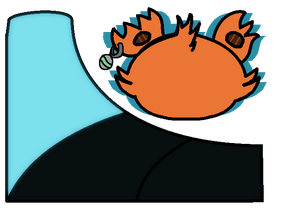 Reten doesn't use his 25% form regularly, often using it when he needs a quick speed boost while using 50% or to quickly add some extra power to his claws. Reten's speed isn't too effected by this form but he's still not at max speed. 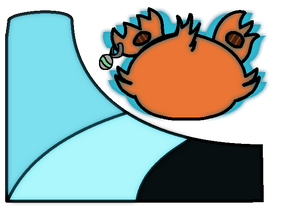 This is the type of Armoured form Reten usually uses, with 50% of his body mass covered by armour. He's noticably slower at this speed but is covered in alot of armour, including pauldrons that when Reten focuses will eminate slight repulsion fields that will push away attacks or projectiles of a low enough magnitude. 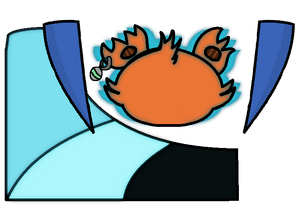 An alternate form of 50% Armour that uses extra Cyrium mass to create long blades that cover his hands. The blades are deadly but come at the cost of motor functions and that Reten cannot utilize the blades in 100% form. 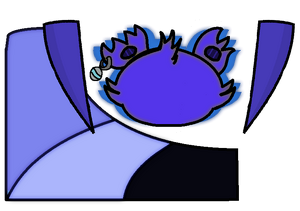 A sorta joke form in which Reten utilizes EX Energy, but only in this specific sidegrade of a variant of a form. Reten's pretty fast in this form, even faster than his regular form and has all the other benefits EX Energy  provides a person, presuming he'd actually use this hyper-specific form... 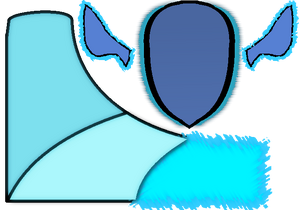 The maximized pinnacle of the Armoured form, 100% Armoured Reten not only gets full armour including cyrium nanites woven into his coat and a dragon-shaped helm but he also gains the Harm Boosters, a set of hovering cyrium jets. The boosters connect to Reten telephatically and allow him to increase his speed to 25% Armour levels or even fly. The boosters use up Cyrium meaning this form cannot be sustained unless Reten wants to move at a snails pace.

The form Reten enters upon eating a Glistening Blump, Reten's body is adorned in golden scales, his claws hardening and becoming charged with kinetic energy. Beings with weaker will tend to bend towards his, either standing down if they were threatening him previously or assisting him in combat. He is also able to convert kinetic energy into gravity wells of equal force, allowing him to pull his enemies in unpredictable directions or add extra power to his attacks.

The form Reten enters upon using a Hyper Orb, his coat becomes more ornate and armored, with guns transforming into oversized killing machines at his touch. He usually keeps the Orb itself slotted into his Cyrium plate.

An overkill combined form Reten enters during Beorns from County Hell, it takes the best of both forms while ramping up Reten's bloodthirst, giving him a berserker-esque mind state.

Reten was born in a rich family on Zeon, his father being an arms manufacturer. Despite this Reten spent most of his time in the slums below his neighbourhood, scavenging for scrap and picking fights. At 13 his Father inducted him into a Black Ops Child Soldier Program, done by the Zeonian Government to try and combat the Catonean Emperor Sudanima who was locked in war with them. He was prophecized to defeat Sudanima, although the actions of another Beorn meant he was merely an assistant to this prophetic battle, which was lost by The Ox and caused the eventual destruction of his planet. Sometime between the loss and Zeon's destruction Reten had formed a gang called The Lamenters and gone off-planet. The gang became a mercenary clique and a successful one at that. After The Bohemian, a member of the group, sold out the Lamenters to Sudanima causing them to scatter and Reten to re-build the Lamenters with new and old members.

Phase 2 - Lamenter Til I Die

With this 2nd formation of the group Reten began taking jobs again, his final one being the infamous Huxxabu siege that destroyed the Neotendoverse on a multiversal scale this became known among some groups as "The day the UPF lost" due to them having to destroy the universe instead of capturing it. Reten's actions in this event  boosted him up to the No. 1 most wanted spot on the UPF's list. After its destruction Reten, a Huxxabu native named Ruby and the UPF drone Meta-Form Prime were all sent hurtling into the New Fantendoverse, specifically into their Earth's Nevada Desert. A U-Hive pod soon landed in the area, the intense Keterwave radiation causing the artificial Beorn inside to gain Reten 's memories, becoming Spree. The 3 soon defeated Meta-Form and began hopping around Nevada.

Reten's allies, Spree and Ruby, end up captured by the private military group the Lanch Kraken Coalition and Reten breaks in rather loudly to break them out. After a jailbreak, a fight and plenty of property damage Reten ends up catured as well until the PMC's leader Latt Ai hires them for a job. They, along with a large amount of expendable LKC soldiers, are sent to the hovering Godfortress currently floating above Nevada to fight The Tragedy's forces. Shit happens, he fights himself from an alternate timeline and walks out with ID, money and a few new friends. He, Spree and Plum all wind up in the World Tournament. Reten is the first eliminated, much to his annoyance. The Tournament was not entirely a failure for him however, as he ends up recruiting Bang Crimson to some sort of team of an unrevealed nature...

Thorn and Reten are a textbook example of blood siblings. The two have fought innumerable battles together and have become fast friends. Reten, believing Thorn would have ended up somewhere in the Fantendoverse, has poured a lot of money into finding her and Mad Dog.

The two have a bitter rivalry and while they dont hate eachoother enough to kill, they certaintly hate eachother enough to compete recklessly and argue constantly. Primeval Thorn thinks that the pair need to "either fight or fuck" which Reten finds to be a fucking stupid analysis of their bitter hatred for eachother.

Reten sees Spree as a brother of sorts and the two often reminisce over Reten's past. He's kinda protective of Spree aswell.

Reten doesn't think much of Plum, not being as hung-up on his species' extinction as she is. However, he respects her fighting ability and enjoys working with eachother.

Reten has a respect for Domino as a fellow bounty hunter/thrillseeker but thinks he's overly cocky and doesn't use his ability to its full potential.

Reten respects Kaiden's fighting ability but finds his social awareness and lack of knowledge of the outside world amusing at best and annoying at worse.

Reten gets on extremely well with Fera, bonding with her over military service and their similar outlooks on friendship and life. That being said the Terran doesn't approve of his more morally ambiguous dealings and methods.

Reten finds Meta-Form to be a bit of a dork and is annoyed by him while Meta-Form finds Reten's methods reprehensible. Despite these differences the two will work together if necessary and in fact work well together.

Reten enjoys Gregor's company due to his laidback demeanour, though their first meeting ended with Gregor nearly getting shot after popping out of the beorn's shadow.

Reten and Mynis are brothers-in-arms, bonding over their shared prodigy status and their flair for the dramatic. Reten often uses Mynis's ineptitude to his advantage, unbeknownst to the brown beorn.

During his tenure on Satellite 15 Reten grew to consider Silver a close friend, as the Zaxinian had been both a tour guide and ally while he was there. The two make a pretty formidable combo in combat thanks to their pooled versatility.

Reten and Zonas had a rough start due to their first interaction being him trying to arrest Silver but upon their second meeting this was patched over, with Reten growing to like the demon. He thinks he's kinda cute. 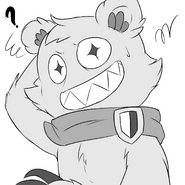 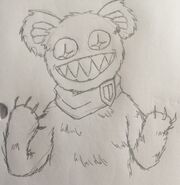 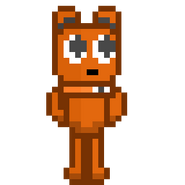 A sprite of Reten by Sroo 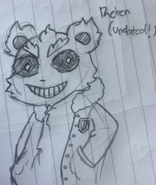 The Great Reten, a Mynis-themed alternate costume but also his own character in Infiverse: Kill Teams

An alt of Reten inspired by Bob from ReBoot

An alt of Reten with his colour scheme inverted.

An alt of Reten as Sans Undertale

An alt of Reten inspired by Dante from the original series.

An alt of Reten inspired by Dante from the rebooted games. FUCK YOU!

An alternate take on Reten's Phase 2 design. Done by Exo.