Start a Wiki
“Heh, no problem! I can save the world without any complains!”
— Renan, showing his positive side.
Renario "Renan" Extreme (Ruinario "Ruinan" Ekussuterimu, ルイーナリオ "ルイーナン" エクッステリム) is a blue-haired mutanted Pikachu with a South Korean accent and the main protagonist in the RenarioExtreme series. He was created with spirits of destiny, speed, harmony and friendship as a newborn Pichu. These spirits were created by Gold Master. He is known as "Blue-haired Saver" by the inhabitants in the world because he kept saving the PokeMutant World from the evil invader Dr. Mewtwo and his servants from taking over the world. He is also the leader of the Warlord Dragon. His code color is blue. His main symbol represents courage. He is voiced by Miyu Irino in the earliest games and the anime Renan! (Except the Drama CDs, where he is voiced by Hiroshi Kamiya). He is later voiced by Kouki Uchiyama starting from Renan's Great Adventure, along with the anime. In the 4th Generation, Johnny Yong Bosch provides his English voice. Renan is also confirmed to start wearing shoes in October 12.

He is also the mascot of RenarioExtreme Inc.

Renan was adopted and re-created by a golden chinese dragon called Gold Master to help him protect the PokeMutant World. He was created with spirits of destiny, speed, harmony and friendship. He was then told to protect the world's unmutanted Pokemon. But one day, a terrible evil genius called Dr. Mewtwo escapes from his meteor prison and captures all the Pokemon to turn them into his minions and also takes all of the Mystic Diamonds to recreate a PokeMutant World. So, Renan sets on his quest to stop Dr. Mewtwo from taking over the world.

When Dr. Mewtwo kidnaps Sunshine and tries to use her as a hostage, Renan must rescue her from him. He must also fight his evil twin, Naner, who is also a minion of Dr. Mewtwo. He also encounters his counterpart, Voltrell, who was working for Dr. Mewtwo, joins in after defeating him.

When Dr. Mewtwo puts a curse on PokeMutant World, Renan must remove the curse and stop Dr. Mewtwo from collecting the Mystic Diamonds.

Renan and the Seven Destructive Rulers

Renan: Return of an Ancient Evil

Renan was playing with his yo-yo while outside his house with his friends until he heard an evil laugh. The Gold Master then takes them to the Shine Emperor, who explains that an ancient evil, the Shadow Lord, has escaped from his hell prison, which the Gold Master and the Shine Emperor had sealed him for ancient times ago. Renan then sets on his quest with his friends to stop Dr. Mewtwo and the Shadow Lord from taking over the world.

Renan is a playable character. He is in the Gold Master's side and is the good counterpart of Dr. Mewtwo.

When Dr. Mewtwo creates a muscular Raichu named Raistrong, Renan must stop Raistrong from destroying him and his friends. after being purified, Raistrong joins Renan's side and betrays Dr. Mewtwo.

Renan was walking in the park until Hiroshi told him that Dr. Mewtwo is going to invade Earth. Renan then calls out Lenan, Sunshine, Rexar, Terrell, Rudy, Shel, Raistrong and Unity to stop Dr. Mewtwo from invading Earth.

Lightning Flame - Renan's main projectile and attack, shooting out a flame conducted with electricity. It is also use to represent everyone's friendship and positive emotions. There is also an anti version of this attack called the Dark Aura, which is used by Dr. Mewtwo, does the exact opposite to it, representing hatred and negative emotions.

Super Renan - Renan's super transformation. He transforms to this form after Renan absorbs the power of the Mystic Diamonds. This form first appears in Renan the Mutant Pikachu.

Dark Renan - The corrupted form of Renan's Super Mode. After Renan feels a lot of negative emotions, pure anger and deep hatred of his enemies, he yells out in pure anger with dark aura (created with his hateful feelings) surrounding him. Once the transformation is complete, he will go on a rampage and destroy everything uncontrollably. According to BanchoArcanine, it is the INCORRECT way to turn into Super Mode.

Hyper Renan - Renan is required to have both Mystic Diamonds and the Guardian Diamond to transform into this form.

Renan Dragon Sage Mode - Renan's most strongest form. After Hyper Renan was easily defeated by ZeedMewtwo, his friends encourage him that he can defeat Dr. Mewtwo and restore the peace of the PokeMutant World. With their support, the Mystic Diamonds, the spirits of importance and the Dragon Sages' soul gathered together, and turned Renan into his Dragon Sage Mode. He is so powerful that even ZeedMewtwo cannot defeat him. However, Dragon Sage Mode also has some disadvantages; if it runs out too much power, the user will turn into a statue, and cannot move until for the next hundred years (unless if someone finds a mystic potion to cure the curse). Renan Dragon Sage Mode also appears in Renan: Grand-Prix Racing 2, where he can be unlocked by completing all Level 5 Mirror with all three stars on it or 6950 races.

In Renan: The Last Destiny, Renan sacrifices his body to destroy Dr. Mewtwo and seal him into the Gate of Darkness. After this, he falls into the acid sea, thus destroying his body into pieces, depressing his friends, but then were surprised to find his soul and organs still alive. In Renan: A New Beginning, Hiroshi found a body that resembles a Pikachu-shaped body with Reshiram features (Tail, Wings and Head features), and agreed that it will be a good idea to put his organs in this empty body. While attempting to revive Renan, they were attacked by Dr. Mewtwo's minions, and got captured by them. Not long after his friends' capture, Renan wakes up in his new body, attacking the baddies with Fusion Flare in his new body. Their friends were happy to see him and hugged him.

Renan is a very brave and adventurous Pikachu. He is said to be a very impatient and outgoing but friendly hero. He always like to hangs around with his friends. He become serious whenever his friends are injured or his uncontrolable love interest, Estella is kidnapped by Dr. Mewtwo or his minions. He usually does things without thinking. Once he gets very frustrated, he loses his temper and starts yelling at anyone who is guilty (espiacially his most dangerous enemy, Axel). He also wishes his friends very good fortune, as his symbol of imprtance represents prosperity. He can also be very mischievious, since he sprayed paint on the Shine Empror statue in the beginning of the first chapter/first episode of the manga/anime.

Renan and Hiroshi are best friends, like if they are brothers. Renan first met Hiroshi when he was trying to stop Dr. Mewtwo to take over his home, with Hiroshi following him, then the two became good friends and eventually stopped Dr. Mewtwo from taking over Hiroshi's adopted hometown.

Renan has an uncontrollable love interest with Estella because of her beauty, even though she became more interested in Unity, who he has a rivalry with, because of his coolness. Estella usually gets very angry when he does something impulsive and/or without thinking.

The Gold Master seems to look after Renan and his friends as if they were his children.

Voltrell despises Renan by his impatience but are good friends.

Renan's arch-nemesis is Dr. Mewtwo, and always prevent his plans to take over the PokeMutant World (and rename it Mewtwoland), steal the Mystic Diamonds, corrupt his friends, kidnap Sunshine to turn her into his show's showgirl, and overpower the Shadow Lord.

Renan sees the Shadow Lord as the most dangerous enemy to him, because the Shadow Lord plans to take over the PokeMutant World and rule it all by himself with chaos and misery.

Renan's arch-rival is Axel, a Meowth with a very miserable past. Axel has been one of his worst enemies because of the reference that cats and mice are mortal enemies, Renan being the mouse, Axel being the cat.

Renan has a strong rivalry with Unity the Lucario, even though he still sees him as a helpful ally.

Before Renan was born as an egg, Dr. Mewtwo had already terrorized Chu Village, planning to change it as an important part of Mewtwoland. After Renan and Lenan were born as eggs, their mother sent them away with a Pidgeot, while his father was still fighting Dr. Mewtwo's army. The Pidgeot then flew away to find a perfect place for them to stay, but on its way, one of Dr. Mewtwo's goons snatched Lenan's egg, along with the Pidgeot, causing Renan's egg to fall off to the Gold Master's palace. At that time, the Gold Master was praying for the Shine Emperor to help, and when the Shine Emperor saw Renan's egg, he told the Gold Master that "the egg inside will hatch into a brave warrior". And so, Renan hatched as a Pichu after it lands on the Gold Master's back. As a result, Renan never knew where he was from, or his parents or true family. So, he always wishes that he could see his true family. 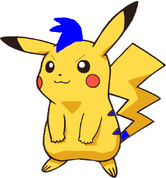 Renan's official artwork.
Add a photo to this gallery

Retrieved from "https://fantendo.fandom.com/wiki/Renario_%22Renan%22_Extreme?oldid=2402079"
Community content is available under CC-BY-SA unless otherwise noted.