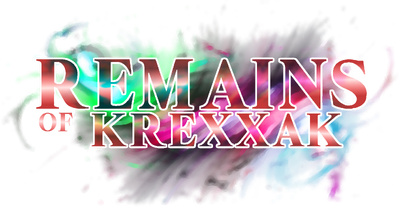 Remains of Krexxak is a RPG taking place in the Ghostrealmverse, developed by Toroko for The V². It is under the Infinite Content branding and was created for Series Swap Day IV. Helena Harper (t∣b∣c) set out to create more of a original story with the world, as well as subverting many of the story elements typically present in the Ghostrealmverse.

Following a Krexxon member named Emid, living on Ascerth. Emid isn't really a warrior and spends his time on hikes as opposed to being part of the utilitarian Krexxon army. Meeting a blind human woman Kaudra, the two begin a relationship that is frowned upon his father, Nemeene. Emid soon uncovers a conspiracy to use a deathly weapon from Kronn Empire ruins, and setting off with a Saff named Resema to guide them and a Saldrik named Jal, the four form a RPG-worthy group to try and stop the Krexxon army from using another death weapon. However, not all is as it seems...

Remains of Krexxak takes place on Ascerth shortly after the events of In The Shadow Of An Empire, although the events of that story are mostly tangential to this one. Following the character of Emid, a peaceful Krexxon, Remains of Krexxak follows his journey of finding love and teaming up to stop his own race from using a weapon found in the Kronn temple located in Drysun Desert. This plot seems hardly complicated, does it? Little do you know...

Like FantendoQuest before it, Remains of Krexxak is stylized after old-style RPGs, featuring a party system, with Emid in the lead. You explore the world from a top-down view. Only one controllable party member, known as the leader, appears at the map screen at a time. You can swap between party members using the trigger buttons. Using the start or select button, you can also view items and assign favorite six items to access quickly.

Like FantendoQuest, characters each have a set of skills that they can use skill points that they gain from leveling up to upgrade said skills. Each skill effects the party members' attacks and other actions like healing. Due to this game's much shorter length, the max cap is 30, although each level gives 2 skill points.

Unlike FantendoQuest, encounters are not random, but rather appear on the map and will run towards characters to initiate the battle mode. The player can control how often monsters attack via switching between Sneaking/Normal/Hunting modes. Normal is default and has normal enemy encounter rates. Sneaking has less monster encounters while Hunting has more monster encounters.

Chapter 1 follows Emid on a hiking trip, which is mostly peaceful until it begins to rain and he takes shelter in a cave. Here he finds Kaudra, of which he talks to and slowly grows attached to. The rain clears and Emid and Kaudra make a promise to meet again soon. Returning back home, Emid is berated by his father, Nemeene, for spending so much time focused on hikes and not allowing himself to be a example of the Kraxxon culture. The two fight verbally for a bit and split off in their separate ways, with Emid heading to a train station.

Emid attempts to draw Kaudra from memory on a sketchpad but is interrupted by a human woman named Kima, who drops some information on him: the Krexxon are attempting to secure a super-weapon created by a ancient race known as the Kronn. The temple they are heading to is located in the Drysun Desert. Emid, alarmed by this information, sets off to try and dissuade the Krexxon Empire from finding it, although they only seem to be energized by his statements.

Defeated, Emid heads back to his home, where the Commandax Queke and his sister Relena are waiting for him. Nemeene, disgusted with Emid's actions, asked for Queke to get him so he could properly train him to being a good member of the Krexxon race. Against his desires, Emid is gathered in a Krexxon truck and is sent off to go to a training camp. During the trip, it begins to rain once more and the truck is suddenly attacked by a mysterious figure with a bo staff. Emid breaks free of his bonds as Queke and Relena lose him in the process. Emid returns to the cave where he finds his savior: Kaudra. The chapter ends with Emid looking at her as she goes back into her cave, following after her.

Chapter 2 begins with Emid and Kaudra huddled in the cave as they stay quiet to avoid capture from Queke and Relena. After the coast is clear, Kaudra kisses Emid and the two begin to talk about the situation. Feeling unsafe, Emid asks Kaudra to go with him to try and get to the weapon to destroy it, fearing he has no other recourse. Kaudra agrees to go with him and the two leave the cave, with Emid creating a make-shift umbrella to protect them from the rain.

While traveling through the forest, Emid and Kaudra get lost trying to figure out where the Drysun Desert could be, coming across a Saff. The Saff, named Resema, explains that she does actually have a map to go there, but it's a far way from here. Emid asks Resema to help guide them, and at first Resema refuses. Emid tells her more about the situation, which gets Resema interested.

With a map and direction, Emid, Kaudra, and Resema head across the forest, taking down foes down in their path as it continues to rain. The dense rain and darkness makes it hard for them to see the roots in the ground setting up a trap just for them and Emid and Resema are caught in a trap, ensnared by the tentacle-like roots of Whisper Willow, a Grovarn that intends to break Emid and Resema's bones with it's roots. Kaudra goes to rescue them, destroying Whisper Willow's roots to free them and later defeat the being entirely, allowing them to finally exit the forest. In the distance, Relena and Queke finally get a clue as to where the two could have gone and set off in that direction.

Retrieved from "https://fantendo.fandom.com/wiki/Remains_of_Krexxak?oldid=3211061"
Community content is available under CC-BY-SA unless otherwise noted.