Along with Regice and Registeel, it is one of the three Legendary golems of Hoenn.

Regirock is a large golem made of brown rocks. Regirock has an orange pattern on its face that resembles a capital letter "H". It has long arms with jutting shoulders and club-like hands, its legs are short in comparison to its body. There is a line of rocky spines running down its back. When it gets damaged in battle it will search for new rocks to repair itself. Because of this, the rocks it is made of come from several different places, which contributes to Regirock's patchwork appearance. Regirock does not seem to have a heart or brain. It generally lives in caves.

Regirock is based on the golems of Hebrew legend. The legends cast them as servants of higher powers and are said to have writing on their heads. When the writing is removed, the creature would be weakened.

Regirock is a combination of regis (Latin for royal) and rock. 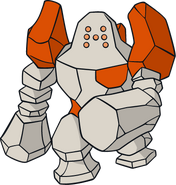 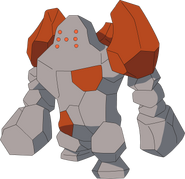 Regirock's Anime artwork
Add a photo to this gallery

Generation VI
Add a photo to this gallery
Retrieved from "https://fantendo.fandom.com/wiki/Regirock?oldid=3200192"
Community content is available under CC-BY-SA unless otherwise noted.