Along with Regirock and Registeel, it is one of the three Legendary golems of Hoenn.

Regice is composed of Antarctic ice that resembles a crystal. Its face has an unusual pattern consisting of seven yellow dots in a "+" formation. It has four spikes on its back. Its legs are conical and it balances its entire body on those two points. There are three fingers on each of its cylindrical arms. In the anime, Regice moves around by floating in the air. Regice cloaks itself in air that is -328 degrees Fahrenheit, and can survive submerged in molten lava and other extremely hot temperatures. Regice slept in a glacier for thousands of years.

Regice is based on the golems of Hebrew legend. The legends cast them as servants of higher powers and are said to have writing on their heads. When the writing is removed, the creature would be weakened.

Regice is a combination of regis (Latin for royal) and ice. 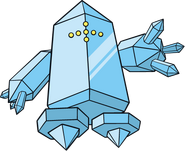 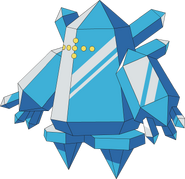 Regice's Anime artwork
Add a photo to this gallery

Generation VI
Add a photo to this gallery
Retrieved from "https://fantendo.fandom.com/wiki/Regice?oldid=3200193"
Community content is available under CC-BY-SA unless otherwise noted.