Reese is a character that first appeared in the Fantendo Visual Novel: Fracture. Although the player can type out a name for Reese, Reese is the default name. One of Reese's traits is it's androgynous appearance, which many characters struggle with on what pronouns to use (except for Leah, who doesn't care and uses both.) It was later revealed that Reese was a male with the DNA of Abba and The Fan.

Reese has blond hair and line eyes, as well as grey skin. Reese also has three fingers, tracing him back to his Fan heritage, although this was changed to five fingers in later appearances. Reese intially wears a blue coat, a black bandana, red pants, and a couple of bandages around the chest.

In Shattered, his design has been altered. He now wears a new colored outfit resembling the site's black and blue theme and he now has five fingers. His sleeves also have a extra stripe.

“Reese is actually extremely flawed. If you can get his attention by being one of those "bad girls", he's totally in love. He does stupid shit for his crushes, which tend to be pretty bad people.”
— Exotoro on Reese
Reese seemingly does not have a concept of good or evil, as evidenced by some of the possible actions Reese can do in Fantendo Visual Novel: Fracture. Although shockingly naive, Reese is actually somewhat tough to persuade.

Reese tends to act on his emotions, which aren't formed very well. Typically he finds himself in love with "bad girls", aka a woman that's willing to murder for whatever they want. Due to this, he finds himself often working for people like Leah Needlenam. With his valuable skill sets, his powers often land in the wrong hands and way too willingly.

Reese appears in Episode Two of the game. Unten and Bowie come across Reese in the forest and proceed to ask what their name is. After telling the bears what their name is, Reese can either follow them to the school or head off on their own to find it.

If Reese follows Unten and Bowie, they will come across Funky Forklift, who was the source of all instances of "Weapon of Choice" in the first act. ScratchKat suddenly comes in and attacks Funky Forklift (who then runs off, swearing it will come back to play a funkier song), and then asks Reese where he is. Reese doesn't know the answer. The four head to the school, where they meet Leah Needlenam, who tells them that they'll have to go through her if they wish to remain on her property.

If Reese goes alone, they will get lost in the forest and meet Abaddon, who attempts to kill Reese, chasing them to the beach, where Reese uses the grind rail to get to the school but meets Leah face to face. It is assumed that the events that happened in the other timeline happened here as well.

In Episode 3, Reese, Unten, and Leah decide to settle things with a Pong tournament. No matter if the player wins or not, Leah Needlenam will just shove the results away and ask Reese to either join her or go against her.

If the player decides to go against Leah, Leah states that she has bombs ready to go for denotation, and tells Unten and Reese to scram. The two meet with Bowie in a club, which becomes the Resistance Headquarters.

If the player decides to join Leah, Leah welcomes Reese in and tells Unten to scram or she'll "blow them all up to hell". Unten heads to where Bowie said he was going.

During the rest of the game, it was revealed that Reese was created from the DNA of the Fan and a woman named Abba (aka Abbadon), explaining his strange ability to reverse time and "walking" through timelines. His "father", Abaddon merely used him as a pawn to escape his cave prison, of which the Enemy was building his own Earth over and stealing the Fan's very own heroes. After taking on Abaddon and Unten, Reese and the others are taken to a meeting of the deities in the Fantendoverse by Palutena, who reveals that White Goddess isn't who she says is.

White Goddess reveals that she used a Catalyst named Trip a couple of years ago to take her sister's spot in the pantheon, as well created more and more time-induced lies about herself and Black God. Nearly everything she's ever pretended to be was a lie and she has been writing out people to take their place, including Plumber and Palutena. The Fan and Vokkskar are shocked to learn that White Goddess is likely behind the fracture of time and space, but the Time Keeper looks at the fracture closer and reveals that is much, much, much older than they've been led to believe. Almost from the very start.

Palutena attempts to kill White Goddess, but 3.14 restrains her as Black God leaves with White Goddess. Unten proceeds to tell The Fan everything he knows about Abaddon and the Enemy Earth, along with Palutena. The Fan quietly sits down and ponders, saying that he will talk with his brother soon. He sends the group back to Earth with the exception of Palutena.

Unten and the others return home. Unten and Reese talk about the Fracture, with Reese believing to be the blame. Unten states that it is not, that while Reese's purpose was created to be a Catalyst, Reese doesn't need to be stuck that way. Unten then ponders Reese's gender, which Abba states is biologically male. Abba then states that they need to find Abaddon and stop the event that will soon proceed: the Shattering.

Reese is available from the start and looks to be important to the plot of the game. Believing to be responsible for the Fracture, Reese joins up with the heroes to stop the event known as the Shattering. Reese can pull objects from parallel timelines and send attacks and projectiles into different timelines to bring them out later. Reese can also preform some limited psychic attacks.

His design has been altered. He now wears a new colored outfit resembling the site's black and blue theme and he now has five fingers. His sleeves also have a extra stripe.

He has been confirmed to be in the game, first appearing in the A New Foe trailer. In this short appearance, he appears from a portal and utilizes a finishing sphere which showcases his finishing move. In the opening for the direct, a montage of each character fighting is shown, showing various stages as well; the last character shown is Reese, and the scene quickly cuts to Reese emerging from a portal, looking behind him, as if he is running from something.

Reese wanders in a large and beautiful garden of roses. Suddenly, a nearby bush shakes. Reese approaches the bush and notices something startled behind the bush. He gets closer, but the thing bursts out and ambushes him, revealing to be Danny.

Danny then battles Reese in the Rose Garden. Danny makes use of various elemental attacks, such as a burst of propelling water. Danny is then seen holding up a Bottle. Reese, however, gathers his strength, retaliating with a teleporting headbutt. Just when it seems Reese will win, Danny catches a Finisher Sphere and unleashes a fiery dragon.

Reese, burned and laying on the ground, is helped up by Danny in a show of friendship. From the distance, Reese notices a familiar red figure coming for him, and the two team up and head for the Titan.

Reese is a Catalyst, which means he can travel between timelines through simply making decisions. This also weakens the time barriers, allowing for those skilled in magic to rip them open and use them. In Shattered, he is able to do some magic himself to open these barriers to store objects and pull weapons out of. He is also able to get visions involuntarily depicting possible timelines.

In Shattered, it is also shown that he is good at playing piano and singing as demonstrated by the scene in the Tavern of Wasteland.

Reese is now a human and thus lacks his Catalyst abilities or anything from the Fan's DNA. However, he continues to be a good singer and piano player. Later on, he will obtain a form called "Catalyst" granted to him by the Fan that gives him his old abilities, but he is afraid to use them, only using it for combat.

It's implied somewhat that Reese has a crush on her, but she doesn't reciprocate. During the events of Fracture Reese never states that but it is, more or less, implied.

In Shattered, it's outright stated for the most part and drives most of Reese's actions from the end of the first act on.

After the events of Fracture, he sees Unten as a team leader.

Hates the idea that he was created thanks to this guy. His relationship with his so-called father is very complicated, as Abaddon mainly used Reese to escape from the cave and when Reese no longer could funtion for him he simply replaced him with Reese II. 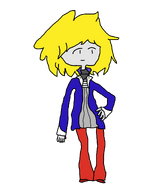