Red Pikmin are the first variety of Pikmin encountered in most Pikmin series games. They are resistant to fire, and have above average strength (higher than that of Yellow, Blue, White, or Flying Pikmin). Their appearance is similar to the average Pikmin, save for their red skin and long pointy nose.

Red Pikmin are the first variety of Pikmin encountered in the 3DS game, Pikmin: Ground Control. Like in other Pikmin games, they have a unique immunity to fire and a slightly higher attack stat than most other species. They can be created by having Red Pikmin bring Pellets back to the Onion, or by throwing Pikmin of other colors into a Ruby, Queen, or King Candy Pop Bud.

Red Pikmin make a fairly prominent appearance in Jake's Super Smash Bros. While not playable on their own, Olimar commands Red Pikmin alongside a number of different Pikmin types.

Red Pikmin appear in Pikmin: Ultrahunt. They have above average attack power due to their noses. They are immune to fire and can stomp out small fires allowing safe passage for Hestia. They can also snuff out the fire at the impact site as well as restore it back. This is useful during the final boss of the game. Since Hestia lacks a working whistle, Red Pikmin either need to be vacuumed off a foe they're attacking or gathered after the foe goes down. They can be used multiple times because of this. 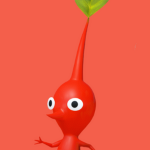 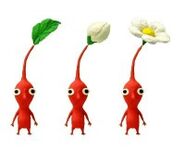