Red Boos, also known as Pink Boos, are a pink or light red variant of Boos. Their differences vary from game to game, but overall their appearance and attributes are similar to normal Boos.

Red Boos first appeared in the "You vs. Boo" mode in Super Mario Bros. Deluxe, as the second fastest Boo the player races (the first being the Black Boo). They also appear in Super Mario Sunshine, where they are found haunting Hotel Delfino and Mario must drive them out.

After the basic white Boo became a playable character in the Mario Party games, the Red Boo took its place as a supporting character. In Mario Party 6 they act the same as normal Boos in earlier games, and steal coins or stars from players.

Red Boos make an appearance in the Mario Kart title, Mario Kart Silver. In the game, they appear as items that act exactly the same as the previous Boo items from other games in the series, in which they steal items from racers. Should, for whatever reason, no racer have an item, the Red Boo will disguise itself as a red, translucent Fake Item Box until someone does obtain one.

One Pink Boo appears as an enemy in World 1-5 Pink Boos Scare. By selecting World 1-5 a cutscene will play. The cutscene shows Mario , F.L.U.D.D. , and Toad walking into Hotel Delfino as a lightning crashes outside. When they enter the hotel it appears to be empty and Toad says "This place is scary" and begins to shake with fear. A Pink Boo suddenly appears in fron of Toad making him jump and scream. Mario rushes over tennis racket in hand and Pink Boo laughs starting the match. The match is a normal tennis match played on Casino Delfino court. If the match is lost the "You Lost" screen will appear. If the match is won a cutscene will play showing the Pink Boo dissapear in fear. Toad (who has his eyes covered) asks "Is he gone?" He takes a peek and notices he is. He sighs a relief and the group continues to walk along the path returning you to the main menu opening a path to World 1-6. You can either choose to head back to World 1-4 or continue on to World 1-6.

Since Pink Boo doesn't appear as an actual playable character he does not have a rival meaning he also does not have a rival shot. According to the characters in game stats it appears to be a tricky playing type. Pink Boo's trick shots (according to the Announcer Toad) are Roundabout (forwards/backwards) and Through it All (Side). Pink Boo's Special Shot is Illusion Shot. 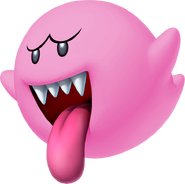 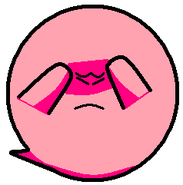 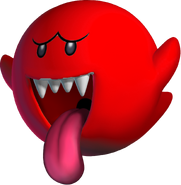